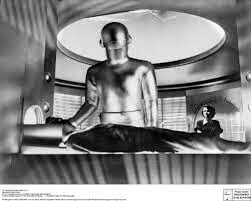 Den Dag Jorden Stod Stille
“The Day the Earth Stood Still” is my last 1951 movie and a movie I have been looking forward to see. I make no secret of my enthusiasm for good science fiction and although there was the risk that this would be extremely kitsch and primitive (1950’ies sci-fi films are usually used as mockery of the genre) I had a hope that this would be at least interesting.


“The Day…” may at first appear to fit the classic sci-fi bill. An alien space ship is arriving on Earth and is causing great alarm. There are panic scenes and great consternation which are entirely in step with the cold war anxiety that had just begun at this time. The spaceship, which is pretty neat, lands in Washington DC (of course, they always do that in American films) and out steps a giant robot and an alien with the classic We-come-in-peace message.


But this is where the cliché ends. The alien is shot before he gets much further by a trigger happy soldier and turns out to be humanoid. In fact there is hardly any difference physiologically between Klaatu (Michael Rennie), as he is called, and the rest of humanity. The wounded man is brought to hospital and immediately subjected to polite but firm interrogation. Klaatu has a message to all nations of the Earth and this seems to miff the US government. As the UN at this point excludes the Soviet bloc that is not good enough either and none of the alternatives the government suggests seems to satisfy Klaatu. Instead he wants to meet the people and escapes from the hospital. This really upsets the brass who had insisted on keeping him where they could control him. The fact that they cannot control him seems to through them entirely off balance, so much so that they issue a shoot on sight order. It does not help that Klaatu’s spaceship is impregnable and that the robot Gort (Lock Martin in a really cool suit) is super strong and has a beam that can make things disappear. The army is helpless against it and that throws the army into a frenzy. Despite Klaatu’s friendly approach and the fact that nobody has been hurt, the army and the politicians decide that this alien is a menace.


Klaatu’s mission work out a lot better among regular people. He befriends a boy, Bobby (Billy Gray) and his mother Helen (Patricia Neal), who thinks he is a New Englander called Mr. Carpenter. Klaatu also meets a scientist who is a lot more receptive than the politicians and they agree to set up a meeting of wise people of all nations instead of politicians to hear Klaatu’s meeting.


Without revealing too much of the conclusion I can say so much that we get a hectic ending with a shooting, a resurrection, a robot in action and the great message that it is time for aggression to end, that the people of the Earth has reached a stage where they are becoming a threat to the surrounding universe. Unless the people of the Earth subject themselves to a world order without war they will be obliterated. And just to demonstrate the power of the alien he stops all machinery and electrical devices for half an hour, except for hospitals and planes. No harm, but plenty of dramatic effect.


The story can be read in several layers. On the face of it it is an exciting story about what might happen if we got a visitor from outer space. Stupidly we would probably try to kill the visitor even if they were friendly.


On the track just below it can be seen as a criticism of the xenophobic attitude of scared politicians and a trigger happy army. The shoot-first attitude quickly takes over when the culprit cannot be controlled. This plays along the communist scare of the period: if you are not our friend you are probably our enemy and we cannot risk that. The politicians and the army are too embedded in the cold war mentality to be receptive to the warning from Klaatu and instead he must find the smart people of the Earth, the artists and the scientist.


But it is in the third layer that it becomes really interesting because this is also a Christ story. Klaatu comes down from Heaven with the promise of salvation, but those in power will not listen. The government wants to use him for their purpose but he refuse to support any one cause. Instead he goes out among the common people to find his disciples. The speech in front of the spaceship is straight out of the gospels. Klaatu also gets killed, but is resurrected and eventually through ascension return to the heavens. Gort is a manifestation of divine power, almighty and just but ruthless and it is easy to see Helen as Maria Magdalene, present at the crucifixion and the resurrection. The people of Earth is promised eternal salvation or damnation at a soon to come judgment day, the choice is ours, and we chose to kill the messenger.


The sublayers are subtle enough that they are not at first apparent and therefore not thrust in our face and it elevates the movie far above the normal B-movie genre that this type of movie would normally belong to. Add to that that the production value is, well, not flawless, you can still see that it is made on a shoestring budget, but carefully made. This is not a run of the mill film but well considered and they get the most out of both actors, special effects as they were available and particularly the cinematography. There are so many great tableaux in the film that this is almost a window into 1951 Washington DC and that I always find interesting.


In a modern mainstream sci-fi film the producers are so busy showing off all the flashes and bangs they can create that the story and the characters are relegated to secondary roles. This was not really an option in the early 1950’ies. The technology was just not ready yet and thank you for that because forcing emphasis on story and characters makes for much better movies.


Normally I watch my movies in small snippets during my breaks, but in this case I just could not let go of the movie. All too soon my time is up and I could hardly wait for my next break. This is how I want to feel when I watch a movie and that is why I give “The Day the Earth Stood Still” my highest recommendation.