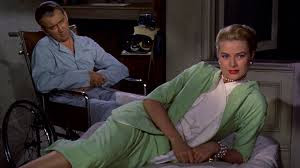 I knew 54 would be a great year because this is the year of ”Rear Window”. As it turns out there are many other attractions this year, but “Rear Window” is one of those movies I have been looking forward to see for a while. This is in fact a revisit as I saw it seven years back while I lived in China, and although I thought I remembered it well I found out I had entirely forgotten the resolution and what a drama!

I should warn the reader that this entire review comes with a large, flashing spoiler tag. I will be discussing that resolution in detail.

“Rear Window” is one of Alfred Hitchcocks most famous movies and for a very good reason. It is absolutely awesome on every level imaginable.

Just take the set. An entire New York backyard built inside a studio where you can watch the going-on’s in all the opposing apartment. It is a voyeurs dream and try as we might it is difficult not to be a little fascinated with the lives through the windows of all these people. In fact you never really notice that this is a studio setting, it feels very real. As in so many other of Hitchcocks films the story never leaved this backyard and so we are as stuck here as L.B. Jefferies (James Stewart).

He is a professional photographer with a leg in cast and therefore stuck to a wheelchair in his apartment. From here his only entertainment is to look out his window and into the apartments of everybody else in the opposing building. This interest out of boredom soon become voyeur obsession of a decidedly unhealthy nature. He watches Miss “Torso”, a skimpily clad dancer, feels with Miss “Lonelyhearts”, a woman so lonely she pretends to have dates, listen to the music of the composer neighbor and so on.

Then one day the salesman right across from him, who always fights with his wife, starts acting weird. The wife is gone, he leaves and returns several times in the night with a suitcase and he is doing something with knifes, saw and ropes. Jefferies is convinced that the man, Lars Thorwald (Raymond Burr), has murdered his wife.

There are two women in Jefferies life. Stella (Thelma Ritter) is the nurse attending his leg and general needs and Lisa (Grace Kelly) is his girlfriend. Both are upset with Jefferies voyeurism, but once he fields his murder suspicion they are converted immediately and a just as much obsessing as he his. Stella has a penchant for the macabre and Lisa I suspect do it because it is a way into the heart and life of the man she love. He is reluctant about marrying her, but as soon as she enters the adventure his look on her changes for the better so it works.

Jefferies calls his police detective friend Doyle (Wendell Corey) repeatedly, but every time Doyle refuse the allegations. There are always perfectly good explanations to what Thorwald is doing.
Here we are at the heart of the story. Jefferies, Lisa and Stella are clearly on an unhealthy voyeur trip. They are the kind of busy-bodies who are drawing conclusions about other people based on vague hints and fantasy. Exactly the kind of garbage you read in gossip magazines. Doyle is the voice of reason and common sense, but they are so entrenched in their murder story that they are hardly listening. Then when they start sending Thorwald notes, dig up his garden and break into his apartment they are clearly crossing the line of acceptable behavior. It is very suspenseful and even more so because I know it is wrong what they are doing.

So, is Thorwald a murderer or is he an innocent victim of serious harassment and slander? This was the part I did not remember and if you do not know it either, please, read no further.

We see something early on that Jefferies is missing because he is asleep. At a time where Thorwald is supposed to have killed his wife he is leaving his apartment together with a woman that looks like his wife. This ties in very well with the information Doyle, the police detective, provides and I felt quite convinced that the man was innocent. Therefore when Jefferies, Stella and Lisa are caught red handed, Lisa quite literally, I am sure there is hell to pay and frankly they deserve it. Yet when Thorwarld enters Jefferies apartment, presumably to knock some sense into him, he is revealed as an actual murder, that they were right all along. I really had not seen that one coming and actually at first I felt deceived, but now thinking about it I realize how clever Hitchcock is. Just as Jefferies is deceived by what he sees when he watches Thorwald so are we deceived. Just because we see more than Jefferies does it does not mean that we see and know everything. We are still only watching through the rear window and are making the wrong conclusions.

It is a genius plot and an excellent story, but it is the execution that really bears the Hitchcock mark. The suspense is almost unbearable and the voyeur fascination is communicated so well that we balance between fascination and disgust. But we also have a brilliant dynamics between James Stewart and Grace Kelly. Yes, of course he is too old for her, but I only think that the first five minutes then I forget all about that. Kelly has one of the most angelic introductions in movie history. When she enters and bend down to kiss him I cannot help thinking he is the luckiest man in the universe. Yet when the male/female conflict rears its head I can also understand why he balks away. She is a strong woman and she intends to domesticate him as a trained dog and of course he is rebelling against that. It feels like an irrelevant sub story at first, but it leads up to the bonding that happens when she joins the voyeur obsession. So clever.

This is one of the truly great Hitchcock film and one that is as good today as in 54. I love it. My wife loves it and I am sure you love it as well. Unless of course you do not like being fooled by a clever director.
Posted by TSorensen at 21:39