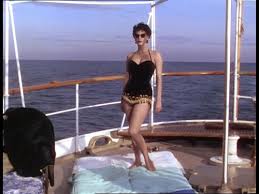 This has been a crazy week. I have been in Istanbul to teach our software and in the evenings I have had two major projects to deal with. That means little sleep and almost no movie time. Fortunately there is waiting time in the airport and so I managed to squeeze in “the Barefoot Contessa” after all. Home again I have to connect the pieces into a whole movie and that actually happens to be what this movie is all about.

“Citizen Kane” was not made in vain. Certainly the team behind “The Barefoot Contessa” saw and studied that movie forwards and backward because structurally and thematically this is a total rip-off. Not saying this is a bad movie, not at all, but you cannot help thinking that they wanted to do a new version of “Citizen Kane”, but this time in color and about an enigmatic movie actress instead of a media mogul.  As far as I can see people have busied themselves guessing who the real actress may be, but my guess is that this is a collage of the fates of several different actresses. The lives of these actresses were rarely easy.

The story starts at the funeral of Maria Vargas, alias Maria D’Amata, now Contessa Torlato-Favrini (Ava Gardner), totally in parallel with Citizen Kane. We now get the story of her rise and fall told by and from the viewpoint of three people close to her and heavily involved in said rise and fall. With such a start we know that we are in for a tragedy and that sort of put a lid on the mood. It is a fatalistic movie because we know where it ends. What we do not know, at least not immediately, is that this is a beautiful tragedy and a very romantic one.

It is incidentally also my main complaint with the movie that the romantic element is played too far. This story gets a bit sticky at times and we have to buy that this otherwise hardboiled realist is at heart a naïve romantic the way we learn that Charles Kane at heart just longed for that lost childhood represented by the sled. I am struggling a bit with that. Well, fortunately this story is not entirely sappy and that is in part due to the borrowed storytelling technique and the quality of the actors.

The key people here are of course the narrators with the addition of a few others. Humphrey Bogart’s character, the director Harry Dawes start out narrating the first part and that is just genius. This is pure “Casablanca”, noir and romantic at the same time and his voice was made for narration. Dawes is in Madrid together with billionaire Kirk Edwards (Warren Stevens) and his PR guy Oscar Muldoon (Edmond O’Brien, second narrator) to scout a “new face” for the movies. The woman they find is Maria Vargas, a local flamengo dancer. Edward wants to go into movies and is setting up a team. He is weird to the extent of being a psycho and I guess this is a nod toward Howard Hughes. Somehow he is dealing with his issues by making movies. His character is interesting and I actually thought that he would play a larger role in the movie, but actually he is here mainly to show that his possessive nature has no effect on Maria Vargas. She cannot be owned.

Maria is an odd mix of dreamer and realist. She is extremely independent and refuses all intimate contact with a barrier she raises to the world. She is like that with Edwards and his replacement, the South American playboy Alberto Bravano (an almost unrecognizable Marius Goring), her mother as well as the media and public in general. She is the ice queen. Yet she longs for and needs something else. One part of it is her prince, the one person who can unlock her and to whom she needs to raise no barrier. Another is a more physical thing. It is never really explained but it appears when she dances, when she goes to the gypsy camp, the mysterious lover (her cousin?) in the changing room or her flings in her marriage. I am not sure exactly what this is, but it could be a physical aspect of the prince or maybe just a physical outlet past her ice barrier.

The men around her takes different roles. Edwards want to possess her as one of his assets. Bravano wants her glamour. To Oscar Muldoon she is a tool, valuable but difficult to handle. Dawes actually seems to be the only one who actually attempts to understand her or at least have some success at that. This is partly ascribed to his director’s sixth sense and partly because he takes the role of the father figure. I actually like this role for Bogart. At this stage of his life (sadly so near the end) it fits him so much better than as first lover. Because of his insight he is quite protective of Maria. He alone know how fragile she really is.

When Maria finally finds in life what she is looking for it turns out to be fake and that leads to her fall. It is the great irony of the movie and also a lot of the romantic allure. Count Vincenzo Torlato-Favrini (Rossano Brazzi) captures her because he has that gift that most if not all woman wish for, the gift to see her soul and speak directly to it, almost as a mind reader (the rest of us men just raise our arms in frustration when for the n’th time we fail to read the minds of our women, something we are obviously supposed to be able to). Maria buys this totally and believe she has finally found her prince. Trouble is that the count is just smarter than the rest, his intensions are no different. Oh, he may love her, but only because she would look good at his side as contessa. Physically he is unable to love. For a woman where the physical part is so important this is no love at all. She also entirely fails to read him and disaster ensues.

I think this is a very pretty movie and I would expect nothing less from the legendary Jack Cardiff and I would have been impressed by the storytelling technique had I not seen “Citizen Kane”, but even with that in mind it is very elegantly pulled off. Ava Gardner is very convincing and I actually had to look up if perhaps she had Hispanic roots (none that I could find) and I can only regret that the mid-fifties hairstyles and fashion made women look so auntie.

The selling point on the acting side however is Bogart. I never tire of him and he is put to good use here in a role different from how we are used to see him.

The only stone in the shoe I can think of is that the romantic elements sometimes get too thick. Almost as if some of the characters, Maria in particular, could use a reality check. I know that is the purpose of the Dawes character, but he is not succeeding very well. Of course if he had there would be no story, alas, I find the romantic elements a little too forced.

I am sure this worked very well at the time and I did find it surprisingly watchable. Would I see it again? Not sure, but I know I was happy to see it this first time.
Posted by TSorensen at 21:23