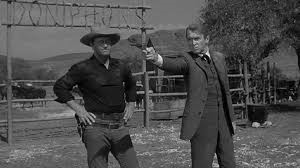 Manden der skød Liberty Valance
It has been a while since my last post. The past two weeks I have been having my “summer” vacation with my family, going to both Denmark and Thailand. I cannot say I really missed watching movies, sitting there by the pool in Hua Hin, but now I am back (and actually already left for my annual business trip to Beijing) I cannot wait to get going again.


Today’s movie is “The Man Who Shot Liberty Valance”, a John Ford movie with an all-star cast. Unsurprisingly this is a western and although I am not a big fan of the genre I was looking forward to this particular movie, largely due to the cast. We get John Wayne, Jimmy Stewart, Lee Marvin, Vera Miles and in a secondary role, Lee van Cleef. This just cannot go wrong.


Yet I was somewhat underwhelmed by this movie.


In a genre that indulges in its clichés and stereotypes this movie goes two or three steps too far in that direction. Let me start with the cast itself:


The story is that of the taming of the west. The (no-named) area around the town of Shinbone has already been possessed by ranchers and is now going through the next phase, the transition from open range cattle farming to that of the homesteaders. Liberty Valance (Lee Marvin) is a local gunslinger, who represents the jungle law of the ranchers while the newly arrived lawyer Ransom Stoddard represents the “civilized” rule of the law. In between these is the character of Tom Doniphon. He is the tough, self-relying and confident rancher type, but he is also friendly to the new homesteader group, not least because he has his eyes set on Hallie (Vera Miles), the daughter of two Swedish settlers. Tom believes in the power of the gun and seems to be a better match against Liberty Valance (at least in his own head) than the bookish Ranse who appears hopelessly unsuited for the jungle law. Yet the core of the movie is Ranse versus Liberty, anarchy versus law, territory versus statehood, ranchers versus homesteaders.


It sounds like a story we have heard before, a few times actually, and with the characters outlined, hopelessly cliché. But placing Tom Doniphon there in the middle, something different happens and this is where “The Man Who Shot Liberty Valance” is best. In the black and white struggle Tom is something as unusual in a western as grey. Tom is the loss of the wild west, the remembered freedom and the sacrifice for progress. John Ford said that although this is a fight between Stewart and Marvin, John Wayne is in fact the central character. I am not sure this is enough to lift the movie into being something special, but it helps.


I have a feeling a movie like “The Man Who Shot Liberty Valance” is better loved in America than outside. It seems to tap into a lot of cultural references that are uniquely American. In this sense it feels a bit like “Mr. Smith goes to Washington”. Personally I never got the idea that you are only a man when you can stand up to your enemy with a gun.


Still as westerns go it is probably not too bad. Time flies well, there is a good pacing and plenty of action. If this makes you tick I suppose you could do worse.
Posted by TSorensen at 17:08