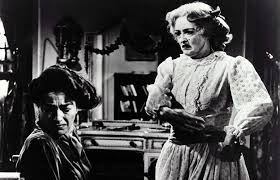 Hvad blev der egentlig af Baby Jane?
Here is a movie I have been looking forward to for some time. The battle of the divas, the one chance the two biggest divas of Hollywood’s golden era had to beat the shit out of each other. Uh, this should be good. But then the doubt would nag me that this could be hugely embarrassing, a debasement of once great women into undignified mud throwing.


In the end it was a bit of both, but mostly the first, but also what I did not expect, a movie which in itself was of excellent quality and well worth a watch.


“Whatever Happened to Baby Jane?” is the story of two sisters, Jane (Bette Davis) and Blanche (Joan Crawford). As children Jane was a star, but also a spoiled and obnoxious child, whereas Blanche was generally ignored. Later, in the thirties, Blanche became a glamorous movie star while Jane’s career never really took off as she owned very little real talent. One night Blanche broke her spine in a car accident, blamed on Jane, which effectively ended her film career.


Fast forward 25 years or so and Jane and Blanche live a secluded live in Blanche old mansion. Blanche lives upstairs, stuck in a wheelchair, and Jane is taking care of her. Jane however is slowly going crazy. She hates her sister, she drinks conspicuous amounts of alcohol and in her mind she is regressing to her early stardom. She is convinced that Blanche wants to get rid of her, which is not entirely incorrect, and her paranoia, delusion and hatred grows steadily in volume as she tortures her sisters and eventually keeps her prisoner, tied up in her own room.


If you have seen “Misery” you get the general picture. In fact I believe Stephen King was inspired by this story when he wrote the book. The core of the movie is the struggle of Blanche to get help and the torture served by Jane. The movie packs an impressive amount of suspense as Jane always looms as a deadly threat and always seems to intercept Blanche in the last minute. I literally sat on the edge of my chair and I truly did not expect that.


The lunacy of Jane is also quite spectacular. The stages she goes through makes her increasingly pathetic, but also deadlier than ever. Her hiring of a pianist (Victor Buono) to prepare her return to the stage is both laughable and painful to watch and it is difficult not to feel sorry for her, though in the pianist’s shoes I would probably run away as fast as I could.


Joan Crawford is excellent as Blanche. Overbearing in the beginning, then frightened and finally apathetic, she plays the role to the hilt. It is Bette Davis however that steals the picture. Her Baby Jane is a master at her work. As acting goes this may be the best she ever did. I love it when an actress cares more for being the role than to look pretty. Baby Jane is ugly as sin and you have to look very hard to see Bette Davis behind the character. Privately both actresses were, it appears, quite unlikeable, but on set they were glorious and this is a unique opportunity to see them both shine.


“Whatever Happened to Baby Jane?” is not perfect. There are elements that jar. I find it suspicious when timing is always so that Jane appears at the worst possible moment. She may go for a ride for hours, yet it takes exactly the time it takes Blanche to scribble a note and throw it out the window. Or get down the stairs to the phone or… yeah, it is almost on repeat. Also there is something about the motivations of the characters that are off. I know there is a big reveal in the end, yet I cannot grasp why Blanche choose to keep Jane around her after the accident and support her through her acting career. Especially when we see the hostility of her as a child. It does not entirely add up.


Still these feel like minor issues in the larger picture. “Whatever Happened to Baby Jane?” is effective suspense, it is supremely acted and there is a fair dose of camp here that never becomes corny. It adds to what has already become a good year in movies.
Posted by TSorensen at 07:02