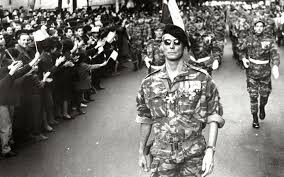 The Battle of Algiers


”The Battle of Algiers” is an Italian/Algerian movie about the uprising that ultimately led to the independency of Algeria from France. It is a movie shot in a newsreel style attempting to be a documentary, to give the impression of reality although everything is staged years after events actually too place.

Let me say right from the start that I do have some problems with this movie.

While “The Battle of Algiers” pretends to be objective and depict reality it is after all an ordered job by the Algerians. According to comments the Italian contractors rejected the blatantly one-sided view the Algerians initially wanted and insisted on a more neutral point of view, but “more” is probably they right word. When you watch this movie there can be no doubt that the movie intends to favor the rebels although it avoids outright demonization of the French. So, we as viewers are supposed to take side with the Algerian rebels.

Well, that is a normal premise for propaganda movies, so I guess we have to live with that.
The real problem is that those heroic rebels are simple terrorists. Random murder, bombings, stabbing, ramming with cars, all those are acts we are terribly familiar with today and I think most will agree that such acts cannot be accepted no matter the cause. Maybe I am particularly sensitive to the subject by having been frequently to Israel over the past 18 years including during the second intifada. I know how it feels to be part of a public that can be subjected to random bombings and stabbings and the rage the French-minded public in Algiers feels is very much understandable to me.

The motives of the Algerian FLN may be noble and they make some fine speeches, even if they do not altogether make sense, but through their choice of means they delegitimize themselves completely. Despicable though it was, the tactic was clever and ultimately successful. The terror attacks generated a huge amount of anger and outrage, which meant that the gloves came off. At the same time it very much created an “us and them” situation between “Europeans” and “Africans”, which threw the regular Algerians into the arms of the FLN, whether they were so inclined or not. Not dissimilar from the situation in Gaza. Because of that it actually did not matter if the FLN survived or not, they had already won the population and thus the war.

The French are through the movie criticized for being cruel and ham-fisted and it certainly does not look good what they are doing. In hindsight there was a lot they could and should have done differently, most of all in the battle of hearts and minds. The colonial disregard for native culture was definitely part and parcel to their ultimate failure. Still, in hindsight, did the Algerians actually win by kicking out the French or would they actually have been in a better place today had they found a peaceful accommodation? I think they would, but in the Middle East people tends to shoot themselves in the foot.

The interesting thing about the movie is that the Italian’s insistence on making it as real as possible inadvertently shows the Algerians in a less favorable light and makes us understand the French. Despite itself it actually undermines the very premise of the movie. One could argue that this is a redeeming feature of the movie, that it proves its neutrality, but I am not certain it is intentional.

A good example is the portrait of Colonel Mathieu, a character who is not real, but a composite of a number of actual characters. He is a hard nail, a ruthless commander who wants to win at all costs, but then the movie also decides to present him in a far more favorable light, one that respects his enemy, command from the front rather than from behind and who asks very essential questions about the motivation for the fight. Hardly a one-dimensional villain.

I cannot hide that I had a lot of sympathy for the French in this movie and very little for the FLN. It must have been very frustrating to live in Algiers at the time and hindsight did not help them much. There is a part of me who despise the movie for its sympathies, a part of me who want to kick the French administration for messing it up and a part of me who am impressed with how real this movie looks and therefore despite having to celebrate the FLN actually ends up condemning it. I think it is worth watching, but it is not a pleasant watch.
Posted by TSorensen at 00:20