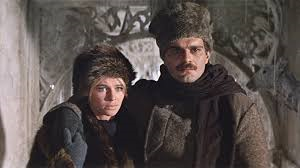 
One of the most prominent movies of 1965, “Doctor Zhivago” is an epic drama spanning some forty years and over 3 hours of running time. It is one of the famous movies in director David Lean’s catalogue which includes such exalted movies as “The Bridge on the River Kwai” and “Lawrence of Arabia”.

By no means a movie to ignore.

So, what did I think of it?

Well, technically this is definitely an achievement. The cinematography, the set designs, the score, the exquisite cutting and editing of the movie, all points towards a master piece. A work upon which not a penny was spared to achieve the sublime. All this cannot fail to impress. I have often wondered where that tune I like to hum comes from and now I know.

Yet, despite all this “Doctor Zhivago” fails to excite me. This mainly stems from the story itself and has very little to do with the production value or Lean’s direction.

“Doctor Zhivago” is the story of doctor and poet Yuri Zhivago (Omar Sharif) from childhood to eventual death in the first half of twentieth century Russia. This is a long a winding story that intertwines with the upheaval in Russia at the time in the form of war, revolution, more war and starvation. Dr. Zhivago is involved with two women, his wife Tonya (Geraldine Chaplin) and Lara (Julie Christie), a woman who is herself caught between three men, the rich opportunist Komarovsky (Rod Steiger), a zealous revolutionary Pasha (Tom Courtenay) and Dr. Zhivago himself. The crazy things happening to these people knows no end and it does not end well for any of them, I think that is safe to say.

My problem is partly that this whole affair tastes far too much like a soap. There are just far too many juicy and obscure affairs, and everybody seems to be involved with everybody else as if this was a few episodes of “Dynasty”. Secondly Yuri Zhivago has control over absolutely nothing. Not events, or his life and not even his emotions can he control. He is completely adrift and while I do not mind flawed heroes he is so impotent I sometimes feel like kicking him. Part of his impotence is none of his fault, but much of it is written into the story as a manipulation and as such feels too much, well, soap-like.

I can imagine many people who would enjoy such a story and be touched to tears by it, but for me it gets over the top and becomes melodramatic and that is such a shame.

There are also some jarring errors that makes me cringe. On the train towards the Ural Mountains it is bitterly cold and snowy, then passing the mountains into Sibiria the climate turns balmy and spring-like. I think maybe Lean thought of crossing the Alps into Italy and forgot that Sibiria is even more forbidding than European Russia. Another example: the palace in Varykino is covered in snow and ice, which works fine on the outside, but inside the palace there is just as much snow and ice. That would imply a seriously drafty house and come spring all this would create an immense amount of moisture. Everything inside would have rotten away in a year or two, yet it has not.

It was a very long movie to watch and despite its obvious qualities it felt like a long movie. The problem of course is that with all the turns and swings this story take you cannot really cut it down without losing essential parts of it. Already Lean has trimmed it as much as it is possible. In 2002 “Doctor Zhivago” was made into a tv series and that format seems so much better suited for this story.

I would not say I was disappointed by this movie but I was not overwhelmed either. Is this good enough?
Posted by TSorensen at 19:04