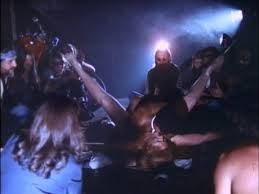 Not long ago I watched and reviewed “Shaft” and I believe I hailed it as one of the first blacksploitation movies. It was predated however by “Sweet Sweetback's Baadasssss Song”, who as I understand it, is recognized as the initiator of the genre.

A lot of what I said about “Shaft” goes for “SSBS” (that really is an impossible title) as well. It goes 100% for coolness and macho awesomeness. The score by Earth, Wind and Fire is fully up there with Isaac Hayes “Shaft” score and, of course, this is a bunch of Brothers kicking some white ass.

That is, however, where the similarities end. “SSBS” was made on a much smaller budget, reputedly 150.000$, and goes for the rustic feel. That means grainy texture, lenses often out of focus and a cutting technique which wants to be edgy, but often come across as awkward and amateurish. The quality and polish is not there and so, probably a conscious decision, it goes the other way.

The other main difference is the plot, which really is something else.

Sweetback grows up in a brothel where he is famous for his sexual prowess from early on. Seeing him as a boy on top of one of the prostitutes was a tough one to eat so soon after “Murmur of the heart”. Anyway, the point is that Sweetback is famous for one thing and that is his mighty dick. One night during a peep show the police show up and want to bring somebody down to the station. It is unclear to me why since there were no subtitles on my copy and the slang combined with poor sound made it a bit difficult to follow. Sweetback leaves with the police and on the way to the station they pick up a Black Panther militia dude from some brawl. The policemen stop and beat up the Black Panther guy with Sweetback watching. At some point it is too much for Sweetback so he beats up the policemen, possibly killing them.

Now Sweetback is on the run and this is the main part of the movie. It is like an odyssey and I would not be surprised if somebody more clever than me would find direct parallels to the stops Homer’s hero did on his journey. Sweetback passes through Beetle’s brothel, a black church and a Hells Angels hideout. Here he is challenged to a duel with the president and when asked to choose weapon, he goes for his prime asset, his dick. And wins.

The police is getting more and more incensed, beating up every black guy in their way, totally unapologetic (police violence against black people is not a new thing) and though Sweetback keeps evading them, they are getting close as he is aiming for the Mexican border.

The point of the movie is obviously that black people are fighting an uphill battle against white authorities, that they can trust no-one but themselves, but that they are truly awesome. As such this is a very political movie and one that seems relevant to watch here in 2020. What Sweetback is up against is a whole bunch of prejudiced Dirty Harrys who prefer to shoot first and will not back down.

While I appreciate the coolness of the style and the music and even the rustic texture I could not shake that cheap production feel. There are montages going on repeat for no obvious reason and strange jumps and cross clips that make it hard to follow the plot. I suppose it was part of the charm, but it often threw me off-track and that is a minus.

Still, overall, I appreciate the experience, not only for political and cinematic significance but for simple entertainment value. It is a recommendation from me.