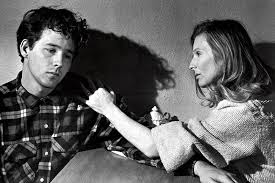 There are sad, declining places and then there is the Anarene, Texas of “The Last Picture Show”. I doubt I have ever seen a place as sad and dull ever, real life or in fiction.

Peter Bogdanovich’ coming-of-age story has as the central character Sonny (Timothy Bottoms), a high school student in the above mentioned Anarene, Texas, sometime in the early fifties. Sonny plays football, but both he and the team suck. He hangs out at Sam-the-Lion’s (Ben Johnson) pool hall with his friend Duane (Jeff Bridges), drive around in his wreck of a car and hangs out with girls. And that is really all there is to do in Anarene.

As in most coming of age movies there is a lot of interaction between the teenagers, but most seem driven by sheer boredom. The only thing you really can do is experiment with sex and alcohol so this they do with abandon. Nothing new, you might say, is that not the topic of any coming of age movie? The difference here is the quiet desperation with which this is pursued. Sonny dumps his girlfriend and starts seeing his coach’s lonely wife, Ruth (Cloris Leachman) while Duane enjoys the hottest girl in town, the rich Jacy (Cybil Shepherd), until she grow bored and decides to try something else, such as a nude pool party. Particularly painful is it when the boys decide it is time for the retarded but sweet Billy (Sam Bottoms) to lose his virginity and set him up with a prostitute in a car while they are jeering outside.

Although the community seems to function on the outside, we learn the same story from everybody once we get closer. Sonny, who is a good listener, hears from Sam, Ruth, the coach and Lois (Ellen Burstyn), Jacy’s mother, how they all had dreams of a better life, but that staying in this place has drained them into a stupor. Living in this place made them ghosts of who they used to or wished to be.

I do not think I ever saw a movie as eloquently describing this kind of quiet desperation. It permeates everything: the color scheme (stark black and white), the wind howling through the empty town, the worn-down pool hall, the empty diner, the closing picture show, but more than anything the eyes of most people in this town. This is a dead-end, everybody knows it, but for many it is too late to escape. It was a depressive experience to watch this, but Bogdanovitch is a good enough storyteller to keep it interesting and despite myself I got drawn into the story.

Often I was reminded of the far more recent “Ghost World” except that is merely one person being stuck. In “The Last Picture Show” it is an entire community that has lost its steam and given up. The quintessential scene must be Sonny having a coffee with Ruth as she completely looses it and Sonny just stares at her with empty eyes and then puts his hand on hers. There is real compassion in that.

“The Last Picture Show” is also the introduction on the List of both Jeff Bridges and Cybil Shepherd. Bridges was at this time already an experienced actor while Shepherd was a model headhunted for the job. Both did an excellent job on this movie and the rest is, as they say, history.

“The Last Picture Show” is a recommendation from me.