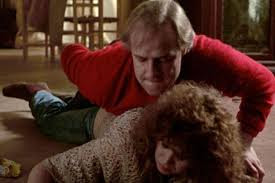 I recall watching “Last Tango in Paris” many years ago and that at the time I thought it sucked. Over the years the details have faded to the point where I mostly remembered something about Marlon Brando being an ass and a lot of sex. Obviously, I was not really looking forward to go through this again.

When you start this low it is difficult not to be positively surprised. “Last Tango in Paris” is not as bad as that, but I cannot say I was impressed either.

Paul (Marlon Brando) and Jeanne (Maria Schneider) happen to visit the same vacant apartment at the same time and somehow start a sexual relationship. I am still a bit baffled how that actually happened, but the point is that Paul insists they know nothing about each other. There is only sex between them. Pure, objectified sex. She is a (very) pretty young girl and he is a brutish middle aged man who takes her when he wants her.

This apparently was a sexual fantasy of director Bertolucci, and it tastes like such a fantasy. Maria Schneider is delicious, but I wonder who would think the same about the abusive Paul character, even played by Marlon Brando? Obviously, I am lacking some insight here, but my failure to understand this attraction is a real problem when trying to get into the story. The idea is that as long as Jeanne and Paul’s relationship is pure objectification and sexual gratification, it is great and gives them something, but when that illusion breaks and they get to know the person underneath, the relationship is less attractive.

And that is essentially the story.

There are two substories. Jeanne is engaged to Jean-Pierre, an aspiring movie director, and that is also a strange relationship. He is obsessed with making a cinema verité movie with Jeanne and is constantly followed by a film crew. Yet it is his own film he is interested in, not really her. Another objectification.

The other story is about Paul. His wife has committed suicide for unknown reasons. They were running a hotel together and she was having an affair with one of the guests and was apparently open about it. Paul and the other guy even wear the same bathrobe. This story may explain why Paul is a bit unhinged, but little else. I even cannot work out if it is a parallel story or watched in flashback.

I did not remember those subplots and they made me hope that I had underestimated the movie, that there were some deeper layers worth exploring, but tying them up it did not lead much further than that Paul was a miserable character and not that attractive. Not the deepest analysis, I know, but all I really saw was that a sexual fantasy only works as long as it is a sexual fantasy. Reality is far too bland and depressing and ruins the fun. And apparently sexual fantasy includes being raped in the butt by a middle-aged man.

Maybe the premier claim to fame is the explicit sex element. There is a lot of skin at display and it is also obvious that the sexual element is central to the story. I cannot complain of what we see of Maria Schneider, she is a very pretty girl, but if this was supposed to be exciting (and I got a feeling this was the intension) it is failing badly. Maybe I have just grown too old, to me it just looked sad and pathetic. Also, rape is not really my thing.

Maybe “Last Tango is Paris” is not as bad as I expected, but it did by no means win me over. Its mix of sex and existential crisis is often a winning formula or a poor excuse to make pornography, but I was really hoping for something more. Sorry, not a recommendation from me.