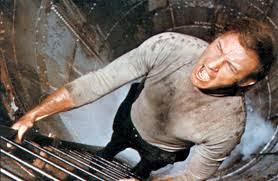 The first off-List movie of 1972 is “The Poseidon Adventure”. The List editors, like the Academy, have their preferences. Some genres (dramas and art films particularly) are well represented while others are not. Disaster movies definitely belong is the later category with only some token representatives. I suppose they are considered pulp, and while I tend to agree, they are often very entertaining pulp.

“The Poseidon Adventure” is most likely not the first disaster movie ever (“Airport” is often mentioned as an earlier exponent of the genre), but it is widely considered the mother of the big-budget disaster spectacles of the kind Hollywood inanely continue to crunch out to this day. It has all the classic ingredients except one: the complete absence of CGI.

The SS Poseidon is an almost derelict ocean liner (think Titanic) on its last voyage from the US to Greece. Shortly before reaching Greece, on New Years night it is toppled by a tsunami wave, leaving it floating around bottoms up.

In classic disaster movie style, we are introduced to a seemingly random host of characters who only have this in common that eventually they will meet up and try to get out together. The premier of these is Reverend Scott (Gene Hackman) whose mantra seems to be “If you want to get thing done, do it yourself”. Sort of an action priest. When the ship capsizes, he tries to gather people around to go the stern, hoping to get out that way. Most people however decide to be sheep and wait around to die. The team he does assemble is a very uneven affair. An elderly Jewish couple, Mr. and Mrs. Rosen (Jack Albertson and Shelley Winters) on their way to Israel to visit their grandson. Two children, brother and sister (Eric Shea and Pamela Sue Martin). Mr. Lonely and singer, James and Nonnie (Red Buttons and Carol Lynley). A purser, Acres (Roddy McDowall) and newlywed, former prostitute Linda Rogo (Stella Stevens) and policeman Mike Rogo (Ernest Borgnine).

Through the bulk of the movie we have essentially an escape room scenario where each room holds their own challenges, each character get a chance to shine and ever so often one of the characters will succumb to the challenges as the ship breaks apart.

On the positive, this is a grand spectacle. The setting, the upside-down ship, is simply astounding. Every single detail is reversed and there is no cheating here. We are talking real fire, water and toilets upside down. Without CGI all the special effects are analogue, and it shows in realism. It is even so that many of the stunts where done by the actors themselves (Shelley Winters gained a lot of weight and learned to dive to do her own underwater stunt without artificial padding!). Technically this movie is top notch.

Where it falls apart is the usual place for disaster movies. An all-star cast could not prevent that all these characters become incredibly cliché. They are almost archetypical of the type of person they are supposed to represent, to the extent that there is absolutely no individuality in any of them. It is all surface, no depth. It is no wonder when you have this many characters and the focus is on the disaster itself, but it makes the movie feel very dated and almost involuntarily funny. There were periods where I was thinking that the movie tried hard to be a family movie with comical relief and all (the mis-matched Rogo couple), but then, the tragedy of all the death around them makes this a fairly poor choice for children to watch.

I probably have more tolerance for this kind of pulp than most people. Give me an interesting setting and I can put up with a lot of crap. Had the child been less annoying, the Rogo’s less comical, Nonnie less scared of everything and the preacher less gung-ho this could have been a great movie. Now I will settle for it being a good representative of a disaster movie and a must see for fans of the genre.

Incidentally, the public loved it. Following its release in 72, it became the highest grossing movie of 73 at the box office.

I think the editors should have carved out a space for this one. It would add a bit of adrenaline to the List.