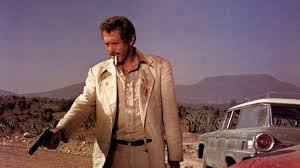 The Book writes that “Bring Me the Head of Alfredo Garcia” is a polarizing movie. I see what the editors mean as this goes both ways for me. It is brutal and disgusting, but also it is also fascinating and raw like few movies. But then, you can say that about any of Sam Peckinpah’s movies.

Bennie, played by a very grimy Warren Oates, is a bar manager in some seedy part of modern Mexico. When some big money gangster types walk in and offer a lot of money for information on a person called Alfredo Garcia, Bennie smells a chance to get out of this dump and move on. Garcia was quite a women’s man and had impregnated a gangster boss’ daughter. He also had an affair with Elita, Bennie’s girlfriend, and now Bennie can get 10.000$ if he can bring back the head of Alfredo Garcia.

Elita (Isela Vega) knows Garcia recently died in a car accident so now she and Bennie embarks on a road trip to find his grave and chop of his head. This turns out to be quite an odyssey with rapist bikers (Kris Kristofferson), Garcia’s mourning and vengeful family and other gangsters looking for that reward. Bennie will find out how far he is willing to go for money.

That is essentially the core of the movie. Bennie must bend all hos moral principles on the way. He has to desecrate a grave, subject his girlfriend to degradations beyond belief, shoot people left and right and drive through the desert with a stinking head in a bag. It costs him everything, including Elita and the accumulation drives him mad. Is it worth it? What is money when it costs you everything else?

This is a grungy movie, almost grindhouse in style. Everything is dirty, the cars, the roads, houses and especially the people. Sometimes on the outside, sometimes inside, usually both. Even the Madonna character of Elita is a whore with crabs. There is a moral capitulation everywhere, closely linked to poverty and the condition that among the poor you can buy anything with money. Mexico here is the lawless place the West is in Peckinpah’s Western movies. There is very little romantic about this world, it is one you suffer, not enjoy, and it is one you need to get away from if you want a chance to save anything of yourself.

Needless to say, this makes “Bring Me the Head of Alfredo Garcia” a rather depressing movie.

There are a lot of Peckinpah staples here. The already mentioned griminess for one. Tons of very graphic shootings, all of which are in slow motion with blood splattering in all directions. There is a liberal use of alcohol, Bennie is rarely seen without a bottle of liquor in his hand or at his side. The liquor is a crutch to cope with the misery, something apparently adopted from Peckinpah himself. The women in the movie are madonnas and whores and generally being abused. We see a lot of Vega’s breasts, but it is used as a sign of her degradation, and you have to be a very disturbed person to see anything arousing in that. Some say Peckinpah hated women and I can believe that.

There is some high art in the very awful and that is more or less where “Bring Me the Head of Alfredo Garcia” is. It is great and horrible at the same time. I cannot say that I liked it, but there is something impressive about it that makes me respect it. Would I recommend it? Not to everybody.