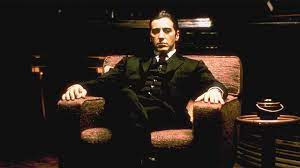 The big winner at the Academy awards in 1974 was “The Godfather Part II”. It was the first sequel to win Best Picture and is, as I understand it, by many ranked even higher than the first Godfather movie.

It is a great movie, I am just not certain I would swing myself that high.

“The Godfather Part II” continues where “The Godfather” left off. Michael Corleone (Al Pacino) is in full control of the family and all its activities. It is big business and big money and despite his promises to his wife, Kay (Diane Keaton) it is still mostly on the wrong side of the law. As in the first movie, this one starts with a big family party, eating, dancing, family and friends while inside presides Michael, giving audience to applicants. There is no doubt Vito’s role is now Michael’s.

Something in the line of a big business venture is in progress involving a competitor or business partner, Hyman Roth (Lee Strasberg). The game in underhanded and involves treason and violence and soon Michael sees enemies everywhere. He finds himself very much alone, up there on his throne.

Intermixed we follow the story of the young Vito (Robert De Niro), how his family was killed by the mafia in Sicily and how he came to America and eked out a living. Eventually, Vito gets involved with the underworld and it turns out he has a real talent. Soon he is the king of the Italian community in New York.

“The Godfather Part II” is an interesting film that tries to dig into the nature of the mafia phenomenon. It is examining how it works, what makes people do what they do and the price they pay morally and as well as physically. It is fascination and abhorrence at the same time. Respect and disgust. The problem is just that as a driver of a movie, especially a very long one as this is, it is not enough. Where Part I had an evolving plot that kept the movie interesting, Part II is more about disintegration than actual plot and it makes the story feel long. I never worked out the details of the plot with Hyman Roth, which is frustrating, but also not really important. Michael probably did not work it out either, he just lashed out left and right, wielding his significant power.

The mixing in of the Vito story did a lot to lift the movie and I found it potentially more accessible, but just as it was getting interesting, it is left floating. When Vito has become a mafioso, he is home, and the story is left there.

On the technical side this is a true dazzle movie. The new year party in Cuba, the Little Italy setting, and the court hearings are such time capsules, full of interesting details. There are so many great acting performances here by such a stellar cast like Al Pacino, Diane Keaton, Robert Duvall, Robert De Niro and so many more. This is a big movie by any standard and maybe that was what dazzled the Academy.

Gangster movies was never really my thing and I do not share that fascination with thugs, so this is a bit uphill for me. Having now watched “The Godfather Part II” I am convinced “Chinatown” was robbed. That was the best movie back in 1974.

I do give my recommendation for “The Godfather Part II”, although I may be the last person above 40 to have watched it. It is a big and important and very impressive movie. It just did not keep me that engaged.