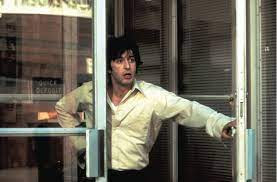 Sidney Lumet is becoming one of my favorite directors. He consistently manages to get a lot out of his material and at least those of his movies that are on the List have managed to draw me in like few others. But then again, starting out with “12 Angry Men” is a running start.

“Dog Day Afternoon” is on paper not a big movie. Its premise is simple enough, a bank robbery goes south because the criminals are a bunch of desperate amateurs, and develops into a hostage drama. Lumet, however molded it into something more, a lot more actually, and this is likely to be one of the best movies of 1975.

Al Pacino is Sonny, who together with Sal (John Cazale) and Stevie (Gary Springer) tries to rob a bank in Brooklyn. The three of them are clearly not very experienced in this line of business and already in the opening Stevie backs out. Sonny tries to take charge of the situation, but he is easy to confuse and it does not help that the cash deposit of the bank was picked up earlier in the day. As much as he wants to be tough, he is also a softie resulting in a number of absurd situations, such as him trying to lock up the staff in the vault, but the girls have to take turns on the toilet first or Sonny insisting on burning the bank registry for reasons he cannot even explain himself, which create the smoke that attracts concerned neighbors and soon the police is there.

Now, I did say police, but it is more like an army of police. Hundreds of heavily armed policemen with helicopters surround the building, climb the roof tops and man the fences. FBI moves in and thousands of spectators. Sonny is not up to this but tries anyway and, somehow, he becomes the little man against the system. People cheer for him and even the staff in the bank treat him with sympathy. It only gets weirder when it turns out Sonny is married with several children and to a gay man called Leon who wants a sex change operation. Sonny wants to do the right thing for people around him but has some pretty crazy and desperate ideas on how to do it.

This is definitely an actor’s movie. There is not much of a plot here, but rather a number of people acting this crazy situation out. Not least Al Pacino. This is a huge departure from his Godfather character. Totally opposite in fact. Sonny has absolutely nothing under control, least of all himself. In a way this did remind me of “12 Angry Men” and not only because everybody are drenched in sweat. It is the dialogue driven plot and the clash of personalities, even the absurdities in this clash.

Somehow “Dog Day Afternoon” becomes a metaphor for the larger society, political in a way, but also an exposition of the absurdities. The regular guy reduced to a bank robber, the overwhelming force of the authorities pitched against the little man, the rebellion against these authorities and the need of the public for symbols for such a rebellion. Meanwhile, it all turns into a sideshow of absurdities, which the media does its best to exaggerate and milk. This is 1975 but it could just as well have been 2021.

I found “Dog Day Afternoon” hilarious and sad, absurd and relevant and thoroughly interesting, both to watch and to think of afterwards. It is by no means a big movie, but it is definitely one of the better movies around. 1975 is off to a good start. Highly recommended.