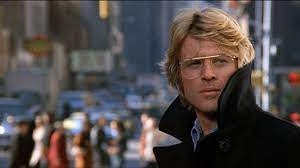 I recall having watched “Three Days of the Condor” ages ago, so when this movie popped up as a 1975 movie not on the List, I knew I had to add it. As it turned out, most of the things I thought I remembered from the movie turned out to be wrong and this was very much like watching the movie for the first time. Only the image of a worried Robert Redford with big glasses held true.

Fortunately, “Three Days of the Condor” is as good as I remember, especially the opening half hour is very promising. Joe Turner (Robert Redford), codenamed Condor, works at a CIA office looking for intelligence clues in books and magazines from around the world. They simply read them and scan them electronically. Sounds very 21st century, but using old, noisy and very unwieldy machinery. One day while Joe is out to pick up lunch, a hit squad headed by the mysterious Joubert (Max von Sydow), takes out the entire office. That sort of ruins Joe’s day. He is not a field agent and is confused on what to do. The obvious thing is to call the head office for help, but when the agent sent to bring him in wants to kill him, Joe realizes that this was an inside job, and he probably cannot trust anybody.

Of course he hooks up with a pretty girl (Faye Dunaway), who does not believe him, but eventually is won our by the immense Redford charm (oh dear…) and Joe goes from hunted to hunter as he sets out to find those who killed his colleagues.

That first half hour is phenomenal, but then “Three Days of the Condor” moves into template-land. Maybe I have just watched too many spy/conspiracy thrillers, and I am a bit hard on it. To me it felt as if the steam came off around the middle part and the entire girl hostage part is mostly unnecessary but quite predictable. They just had to bring in a love interest. Then comes the unravelling of the conspiracy and again the story gets tighter. There are some interesting and mildly puzzling things around the Joubert character. A hitman who is professional to the fingertips, entirely cold on his kills, with no other loyalty than his job, but outside the job jovial and entirely ordinary. The way Joe Turner is a regular guy with an odd job, so is Joubert.

The targets of this movie are the power games casually played by agencies like CIA. The hit was orchestrated by a renegade group within CIA (ups, spoiler…), but not more renegade than having opinions and employing methods condoned by the larger CIA. This makes the larger organization just as guilty as the renegade operation, and Joe learns there is really no difference.

In the wake of Watergate and a number of other shenanigans, “Three Days of the Condor” tapped into a general sentiment of distrust toward the power structures, which anchors it in this period, but the theme has been persistent and works just as well today. Conspiracies, or at least the suspicion of conspiracies are very much alive and well today and while many belongs to the fringe, there are enough crazy stunts around the world to feed Hollywood for decades to come.

Shake off the clichés and template structure and “Three Days of the Condor” is highly entertaining. It has its eye-rolling moments, but there is enough meat here to keep me going and yeah, I admit it, I read a lot of these stories in my youth.

Not exactly Academy material, but you could do a lot worse than watching “Three Days of the Condor”.