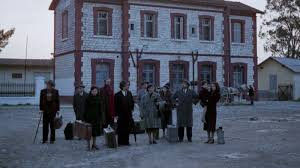 “The Travelling Players” may have a plot, but I was not able to discern it. Being rather confused, I checked the Wikipedia page and there I found a plot summery that I did not recognize at all. What I saw was a story that was jumping forward and backward in time, sometimes mid-scene and usually without explaning that we were now in a different time. The earliest scenes seem to be 1939 and the latest scenes 1952. They are all in Greece and they all feature a group of travelling actors. To me, it looked as if the troupe is fairly consistent throughout, which is a little bit odd since members of the troupe are frequently shot to death and I should suppose the children would grow up over the span of 13 years. I never got much of a relation to any of the characters and I knew as little about each of them by the end as in the beginning. What they are basically doing are moving around, trying to set up the same show and usually getting interrupted (violently).

There is a part of me believing that the reason I cannot discern a plot is because I am lacking an understanding of the background for what I see. There is clearly a lot of references to Greek history in those years and while I do recognize German or British soldiers, everything else is just a blur of names and various people fighting.

Another part of me hopes that I am not supposed to recognize a plot (and therefore not entirely imbecile), that this is not a progressive story but a series of tableaux of a rape on repeat. The raped victim is the Greek population represented by the players. They cannot settle, they cannot get on with what they are doing (setting up a show) and they are subjected to violence, degradation and internal strife as everybody and their mother is fighting over them. According to this interpretation we see an endless fighting with external and internal enemies. Nobody is right, nobody is wrong, but everybody terrorize the civil population in the process and the result is a broken populace in poverty and misery.

I have no idea if this interpretation is correct, but that it should be a depressive one is a given, considering the hopelessly gray and winterly cinematography. This is very far from the sun-soaked Greek vacation image I have of Greece from my visits there. Not even Athens in the wake of the debt-crisis looks this sad.

“The Travelling Players” is also an example of what happens when the director is allowed all the running time he wants and therefore skip the trimming part of the editing. Angelopoulos takes all the time in the world to tell this story (three hours and forty minutes). A story, which is essentially a scene on repeat. In this sense it reminded me a lot about “Jeanne Dielman”, with the difference that I was a lot less confused there. Maybe the extensive running time is an image on how long the people had to suffer?

Confusion is indeed the prevalent feeling throughout, together with depression. Mostly I would be watching, hoping for something to anchor my understanding until that point where I gave up hoping and just resigned to accept that is about the Greeks getting raped again and again by everybody including themselves.

If this sounds like something for you, go crazy. The movie is available in full length on YouTube. The poster for the movie on Wikipedia is not in doubt. It sports the headline: “One of the Best Films in the History of World Cinema”. No less. Edited down to half the size it might have half a chance at that. As it is I cannot honestly wish this movie on anybody.