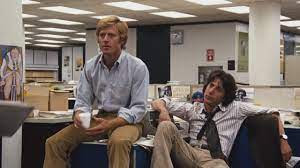 One of the most common conspiracy theories is that there is a cabal in the government trying to manipulate things through illicit means. Well, it is, I suppose, an entire family of conspiracy theories. Unlike most of those far-fetched ideas, this one actually happened and curiously enough operated by the very same kind of people who believes in these theories. Thieves believe everybody steals, I suppose.

It is a commonly known story that it was two journalists at the Washington Post who traced the infamous Watergate burglary to the top-echelon at the White House and brought down the Nixon administration. Robert Redford was so fascinated by the story of these two journalists, probably more than by the case itself, that he approached them and got their help to make a movie about them. The result is “All the President’s Men”.

Bob Woodward (Robert Redford) and Carl Bernstein (Dustin Hoffman) are two, young and low-rung journalists who get assigned to cover the burglary case. They soon learn that the burglars have ties to the White House, but the waters are very murky. Woodward has an anonymous contact at Justice, Deep Throat (Hal Holbrook) who tries to nudge them along with riddle as in some treasure hunt for adults and then it is out knocking doors, to piece together the puzzle.

Jason Robards as the Post editor is both encouraging their investigation and holding back the story, insisting on more meat on it, which forces Woodward and Bernstein to dig deeper until they find out how deep this conspiracy runs.

This is, I understand, a fairly faithful representation of their story. The newsroom at the Post was recreated so exactly that authentic Washington Post garbage was flown in so even the bins were like the real office. This also means that the investigation of the movie follows the same steps as the real investigation and those were, frankly, very confusing. I had to concentrate hard to follow it. There are so many names thrown around, hints and references than mean nothing to me and seemingly the same exercise repeated again and again. What I did work out was that it was the payments to the burglars that led to CREEP (the Committee to RE-Elect the President) and further up to the closest associates of the President, but also into the FBI, which was supposed to investigate the burglary.

It is an opaque case, but it is also presented in a broken form. Certainly not through easy to read flow diagrams, which leads to authenticity but at the expense of understanding exactly where you are in the movie.

Eventually, there is a backlash. Woodward, Bernstein and indeed the Post feel the wrath of the White House and they start getting paranoid. Are they being followed and bugged?

Then just as things look most dangerous and uncertain, the case is closed and the president falls…

The idea is, that at this point the story has caught up with what is publicly know, so the rest is history, as they say. Except that I am a foreigner living more than forty years after the fact. This is not known history to me and I simply missed the clues to how they pulled it off.

This is an interesting story, even an important story and I love the authenticity and the refusal to do a Hollywood spin on the story, but the cost was that it lost me on the way. I will have to read up on it though, it is too interesting to miss. I want those ten minutes the movie cut away.