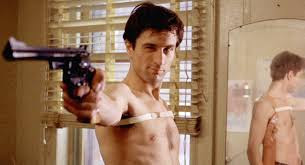 The picaresque novel has a long history, going back centuries. My book blog counts a number of these, but also the picaresque movie has something of a history. The typical format is that of a traveler, who in each location meets new people and new situations and in the process of these encounters the traveler while being an observer, is formed and may form his world. One of the finest, and most classic, of these is Martin Scorsese’s “Taxi Driver”.

The idea of a taxi driver as the traveler is brilliant and has been used frequently since. The taxi driver picks up different characters and go different places with each client and in the process experiences and observes the locales and the people. Travis Bickle (Robert De Niro) is such a traveler. He is our observer and commentator as he drives taxi at night in New York. As a character Travis is an empty vessel. He is alone and with a minimal of baggage. Cut off from his family and with a background as a soldier, he possesses nothing but what the city gives him. That is unfortunately mostly negative experiences. As a night driver, Travis experience the underworld, prostitution, violence, drugs and scum of all sorts and it gives him a cynical and disgusted outlook, but it also forms him as to how he should be. He becomes as crude and degraded as the city around him.

One of his stops is to observe Betsy (Cybil Shepherd). She works in a campaign office for a presidential campaign and is his goddess. When he finally gathers the courage to approach her, it is so awkward that it is both painful and hilarious to watch. She is in a completely different league from Travis and he simply has no interface to her. His idea of taking her to a movie is to go watch a porn movie in a seedy joint! Guess how that turns out. To Travis, this failure feeds into his general disgust and people like Betsy become representatives of a world he despises.

Another character he meets is Iris (Jodie Foster). She is a very young (12, if we are to believe her) prostitute. Again, Travis simply observes her and decides she needs help. Iris is incredulous and has no idea what he is talking about. Again, Travis attempt at breaking out of his internal world and connect with the outside world is awkward and he fails to connect.

Travis’ response to all this is to go ultra-right. He wants to clean the town, he wants to do something and in his world that means to go kill the bad guys. At first he settles for the politician Betsy is working for and when that fails, he turns his vengeance on Iris’ perceived tormentors.

This is a movie that is scarily relevant today. Travis’ character can be recognized from countless assassination and shooting cases and his voice is echoed by militant right-wing people the world over. I have had taxi drivers echoing Travis. The alienation, the loneliness, the impression of moral decay is all too common and today such people can confirm themselves on social media. “Taxi Driver” was blamed for inspiring this sentiment, but it was just an early mirror on a sentiment that has only grown since.

Travis is the picaresque traveler who gets formed by the world he travels through, but fails to connect with it. He morally degrades along with this world and thus he shares fate with the city.

This is not a feel-good movie, but it packs a hell of a punch. It is crowded with rising stars, has a haunting soundtrack by Bernhard Hermann and is brilliantly shot and directed. It may be the best move in 1976. Also, it gave De Niro his famous line “Are you looking at me?”.