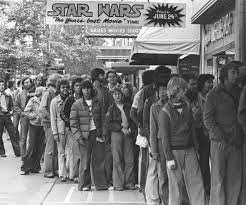 There is something immensely silly about writing a review of the original Star Wars movie, the one commonly known as Episode IV - A New Hope. I bet there are hundreds, if not thousands of such reviews around. Everybody and their mother have watched it and if you have not, I wonder what you are doing on a movie blog in the first place. So, I will do it a bit differently and talk about my personal experience with Star Wars.

I was too young to watch Star Wars in the cinema. In 1977 I was barely 4 years old, and it would be another few years before I would start going to watch children’s movies in the cinema. I did see a picture recently of people queuing for Star Wars in 1977 on Facebook and I found it oddly fascinating. Back then in my early childhood people really looked different, yet Star Wars feels, in my humble opinion, fresh and modern even today.

My first experience with the franchise was the toys. It was all the rage, but ridiculously expensive. It was that or Lego, but awesome as those spaceships were, you could not actually build anything. They could blow up though and they did that very well. The coolest friends were those with a lot of Star Wars toys. Many years later, when I got a son myself, he got an awesome Y-Wing bomber in Lego. He was of course way too young for that, but for his father, building it was pure bliss.

Only after the release of episode VI did I start watching the actual movies, but then I could not stop. I have no idea at all how many times I watched them, especially episode IV. Not in the cinema though, that train had passed, but we had some very worn VHS tapes copied from television.

I guess I am one of the purists when it comes to the Star Wars universe. As much as I adore the early three movies, I have never come to terms with the prequels or the countless Disney installations for that matter. There is of course the commercial exploitation element souring things, but if I really should be honest, it is a matter of design. I love the angular and brutalistic design of the early movies. The have knobs and wires and bolts and feel like they were built of iron plates on a shipyard. There is a texture and substance to them that probably also have something to do with the model work rather than the CGI used in a later age. The pace is also slower and there is a buildup that has all but gone. Rewatching Episode IV for the first time in some years I am struck with how slow the action actually is until Falcon lands on the Death Star. Sure, there are light saber fight and blasters being fired and an awesome fighter attack on the Death Star, but it is not a start to finish adrenaline rush. Maybe I am just getting old, but it feels like my pace.

Talking about that attack run, our cinema had a small arcade of video games and the greatest one was a game on that fighter attack. I spent a fortune on that…

Star Wars is the first movie on the List where I do not feel like I am watching an old movie. To me, it is my generation of movies, a modern movie if you will, and I think that marks some sort of turning point on this project. The beginning of a different era. Perhaps also in a real sense. At least in the science fiction genre there is a before and after Star Wars. The clunky, clumsy and cheap science fictions were now a thing of the past and the genre would now receive the big budgets it takes to make truly impressive movies. Most of modern science fiction and probably blockbuster movies in general owe a debt to Star Wars. Not to mention Harrison Ford.

For my rewatch I picked the original theatrical version rather than the modernized one from the nineties and it worked just as well as always.