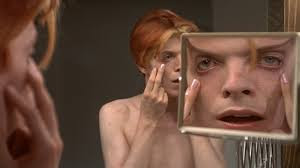 After a series of movies that I found less than great I was positively inclined going into Nicolas Roeg’s “The Man Who Fell to Earth”. I mean, it could not be as bad as watching “1900”. Also, this is a movie with David Bowie, yeah!

It was an early disappointment though that this movie does not feature even a single song by Bowie. I think more than anything, this was what I had been looking forward to. The back story to this assumption is that earlier this year I watched the Bowie musical “Lazarus” live on stage in Skuespilshuset, Copenhagen. This is a show that uses the characters and story elements from the movie, combined with a lot of great David Bowie music. More specifically the part where Newton lives in a drunken stupor in a confined hotel room, reflecting on his life and the people in it.

Anyway, I am getting sidetracked, “The Man Who Fell to Earth” is the story about a humanoid alien (Bowie) from a drought-stricken planet who is visiting Earth in order to get water to his planet. He comes with a host of technological advances and uses them to get immensely rich with the help of a lawyer, Farnsworth (Buck Henry), whom he makes a manager of his company. Newton, being an odd fish, strikes up a friendship (and considerably more) with a hotel housekeeper, Mary-Lou (Candy Clark) and a womanizing scientist, Dr. Bryce (Rip Torn). He is just about to succeed in his mission when some entity, the government or a competing company, it is never entirely clear, steps in and shuts the entire operation down. Farnsworth is murdered and Newton is confined to the aforementioned hotel room.

Being an alien, Newton of course has some really weird abilities. One of them is that he not only sees but can project himself in time. This has a counterpart in the extremely jagged and jumpy structure of the movie. A lot of it consists of small, unexplained vignettes, which serves to throw the viewer off balance (and become a tad annoyed at times…), but this is also an imperfect view into the perception of Newton. Only gradually do we understand the story and its background and until then it is just odd scenes.

Newton is an alien to human life and through him we are exposed to the fallacies of humanity. This is a common trope, but it is a lot more subtle here than usual. The message, though, is familiar. Humans are egoistic, xenophobic and governed by lower instincts. It is not that Newton does not understand these things, his reaction to them is just very un-human. It is easy to see him as a sacrificed Christ character, but he is no saint himself. He is just different.

“The Man Who Fell to Earth” is not a feel-good movie. It is not even tragically funny. It is sad and misanthropic, but there are flowers in the desert, these small elements of hope and benevolence that saves the movie from being a complete misery-fest. They are few and far between, though, and it is difficult not to feel sorry for Newton and the prospects of humankind.

Nicolas Roeg is one of those directors you come to expect a lot from. His movies are challenging and difficult, but also rewarding to watch and “The Man Who Fell to Earth” is no exception. I was weirded out several times, but I always found my way back to the story and I understand the decisions he made. This is not cinematography for the masses but how an art cinematographer makes a science fiction that is really about the human condition.

David Bowie did not sing, but he was still phenomenal. He was a true spaceman.