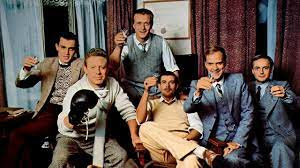 Paul Verhoeven and Rutger Hauer is back and this time in a very different movie from “Turkish Fruit”. “Soldier of Orange” (“Soldaat van Oranje”) is a war epic, the kind of movie that celebrates heroic and patriotic feats, where men are real mean and women pretty and… not so much more. Really far away from “Turkish Fruit”. Yet, it would not be a Verhoeven movie if it did not have a subversive element or two.

In 1938 a group of young men are starting university in Leiden. They become friends and we see them together in a number of settings, including a photo session. Each of these young men will have a different fate during the war. Erik (Rutger Hauer) is the one we follow the most. He is not, like Robby (Eddy Habbema), drifting towards the resistance, nor is he like Alex (Derek de Lint) joining the Germans. Circumstances, such as when Jan (Huib Rooymans) gets in trouble for being a Jew, forces him to commit and soon he is wanted by the Gestapo. Erik and Guus (Jeroen Krabbé) are spirited away to England, where they meet the Dutch Queen and are soon engaged on a secret mission to smuggle out some high-profile leaders for Queen Wilhelmina’s exile government. A mission that does not exactly go according to plan.

Erik Lanshof was a real character, and the movie is based on his own story. Tying a story to real events has the distinct advantage, especially when filmmakers are true to the story, that the plot does not follow a standard storyline. There are twists and turns here that a classic Hollywood screenwriter would not have liked, and few of the characters are as black and white as the almost cartoonish format will have us think. This is also the Verhoeven trick, to lead us into a cliché world of exaggerated color and characters that are easy to classify (think “Starship Troopers” and “Robocop”) and then undermine it by throwing in some gray or just some ugly reality.

The young men think they are invincible. A little war will just be fun. Teasing the Germans is just next level of pranking and suddenly it is deadly serious and death is really ugly. Guus, the overconfident womanizer, gets a very bad wake up call and his demise is like the ugliest of all. What is a hero really out there in the real world? How many terrible mistakes by the heroes do we not hear about?

Speaking of Guus, I had this strong feeling that I knew his face from the moment we see Jeroen Krabbé in the first scenes, and then it struck me, its Dr. Nichols from “The Fugitive”! It is such a distinct face.

“Soldier of Orange” is a big production, the biggest in The Netherlands at the time, and it shows. There are no half measures on the production value and it feels impressive as a grand film and maybe that is its problem. At least until halfway in. It feels like flag-waving, as The Netherlands wants to celebrate its heroes. Maybe they needed that as a counterpoint to the Anna Frank story which is the one most people know. But when I caught the Verhoeven undercurrent, when imperfections and gray zones sneak in, when humans become small, then I started to appreciate the movie. It is random circumstance that set people up as friend or foe, as hero or coward. Even the worst traitor is fighting for something. Even the biggest hero fails. That is total Verhoeven and that is, I believe, why this movie is on the List.

I certainly liked it better than “Turkish Fruit”.