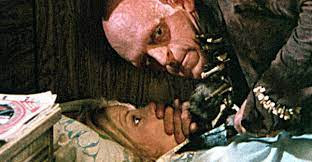 I am wondering why I never watched “The Hills Have Eyes” before. This falls well within the sort of movies we liked to watch on campus back in the nineties and a lot of the storyline was familiar to me, but alas, this was a first viewing for me.

“The Hills Have Eyes” is an early movie by horror/slasher legend Wes Craven. This is from the part of his career where his movies were more driven by enthusiasm than budget, but that is often how the best movies, or at least most watchable movies, are made.

A middle-class family enroute to California is making a detour through the desert to look up some obscure silver mine. When they make a brief stop at a derelict tank station they are warned to stay on the main route and make no stop in the desert, but this sort of people never listens to good advice. Soon they find themselves lost on a dirt road with a broken car. To be stuck in the desert, underequipped and with a broken car is bad in itself, but this particular desert is home to a family of feral cannibals… How will that work out for the stranded Carters?

“The Hills Have Eyes” is a movie in the same vein as “The Texas Chainsaw Massacre” in that a group of unsuspecting outsiders venture off the main roads and civilization to enter a depraved and barbaric world. A theme that has been used far outside the horror genre, but has been particularly embraced by that one. We know something is wrong out there, but the characters do not, and they usually find out too late that this is a very dangerous place.

Another trope is that the outsiders are particularly obnoxious, with problems or complaints that are utterly insignificant to the much more serious situation they are about to find themselves in. You feel like shouting to them to pay attention and NOT do stupid, silly things, but that is the point, no? Bobby (Robert Houston) is the first to realize something menacing is out there when he finds one of his dogs gutted, but nobody is listening to his worries. When Lynne and Doug (Dee Wallace and Martin Speed) insist on sleeping in the car rather than a trailer to have a cozy time, Bobby and we know this is a very bad idea, but there is no getting through to them. The father (and grandfather to the baby) Bob (Russ Grieve) learns the truth when he hikes back to the gas station for help but too late. His death is a gruesome one.

The feral family is a counterpoint to the victim family. In many ways a parallel, even. Except they are the hunters and have shed civilization. Jupiter (James Whitworth) as the family head is particularly gruesome with his broken face, but it is Michael Berryman as Pluto with his particular physical appearance and sinister acting that steals the picture. I learned later that he is a really nice guy and very intelligent, but his acting skills are excellent, and he is very convincing as a monster. Berryman had and still has an amazing career.

Had a movie like this been made today (and they are!) I feel certain that everybody would die a gruesome death, maybe leaving a testimony as found footage or something, but the direction of “The Hills Have Eyes” is a little different. The point here is that only by becoming murderous and feral themselves, like emulating the desert family, will the Carter family or what is left of it, make it through. The victims have to become the hunters themselves and shed their civilization. That is not so unusual a plotline either. It is probably more in line with the age in which it was made. The “Aliens” movies went is the same direction.

“The Hills Have Eyes” was made on a low budget and sometimes it shows, but it is actually not a bad thing. Intentionally or unintentionally, it allows for a dark humor to sneak in and gives it a cartoonish element that makes this more enjoyable to watch than the gruesome story would allow. This has probably contributed to its popularity and its cult standing. Personally, I am too easily startled for horror movies and does not really have the stomach for slasher movies, but these qualities make “The Hills Have Eyes” endurable for me and even entertaining. Dare I say enjoyable?

“The Hills Have Eyes” is one of the important and defining movies of its genre and it is a recommendation from me.