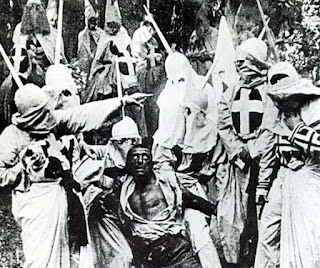 This is a terrible movie!

There it is, I just spoiled my commentary by starting with the conclusion.

When I see a movie my first and lingering feeling that the movie left me with is also what I judge it by. All the academia only comes later. Am I bored, excited, laughing, captivated by the piece, this is my prime concern. That is maybe due to my background which is not in the humanistics, I do not know, but it is more likely just normal human reaction.

This movie left me disgusted.

"The birth of a nation" is the founding movie of the full length feature and it certainly is full length. It takes place during the American civil war and has its sympathies firmly with the south. This is depicted as a struggle for freedom, for white supremacy and to keep the abolitionists out of their hair. Of course the south looses and the blacks take over and transform the once so ideal south into something between a circus and a zoo with the blacks depicted as little more than apes. Then who saves the day? The Clan of course. Like some Robin Hood or Dick Turpin the noble clansmen protect the south from total degeneration.

Does this leave you with a bad taste in the mouth?

This reminds me of nazi propaganda. There are plenty of veiled racism out there but here it is as if Griffith does not even recognize it as racism but just the most natural thing in the world the way scientist before WWII could talk about eugenics without blinking.

So why do I watch this stuff?

Well, the obvious answer is that it is on the list. Clearly an OCS explanation. But there are other reasons too. Technically this was a huge leap forward. The battle scenes, the epic style, the drama, this movie really broke new ground and it catapulted D.W.Griffith into stardom. From this movie a new concept was born, the feature, which enabled more elaborate stories instead of the small novellas of the two-reelers. Also "The Birth of a Nation" became a monster hit at the box office and remained so for many years and brought the race issue into the headlines. Looking back this piece of overt racism may have done more for emancipation than any other movie.

Did I like it? Hell no!
Was it worth seeing it? Definitely!