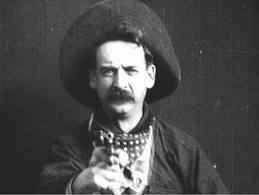 "The Great train robbery" is the second of the early pioneering movies on the list. That means that this movie together with Melies "La voyage dans la lune" represents the birth of cinema. In a way it is unfair to summarize the first almost 20 years of cinema in just two movies, but then again how many memorials to the birth of cinema do you really need?

And that is basically what this movie is. Where "La voyage..." is taking place on a stage, "The great train robbery" is shot on location with different scenes and an almost coherent story line. Hopelessly primitive by modern standards but in all its primitive form it is all there. And of course this is considered by many to be the first western, even if it took place in New Jersey.

It is not a movie you see for what is in it. I found many scenes too long. How long does it take to tie up some dude and how long do you really need to stand in front of all the train passengers waving a gun? Also I think I only caught the entire story on my second watching. But setting that aside watching this piece as a historic document makes it a lot more interesting. I can only imagine how it must have been making this movie with the equipment at the time and without much experience to draw from.