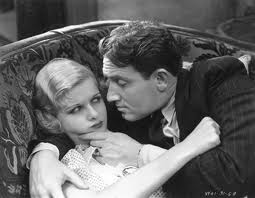 Me and My Gal
The past two weeks have been very slow for my movie commentaries. I have been in Brazil on a job and it has been a busy time. Somehow movie reviews get a lower priority when the alternative is hanging out on Copacabana or swimming in Florianopolis. Airport time however is perfect for watching movies, especially lighter ones and few are lighter than “Me and My Gal”. That does not mean it is stupid, oh no, for that you just need to take a glance at my recent post on movies on planes. No “Me and My Gal” is quite a smart film, in fact it is all the wisecracking that is really driving the movie because the story is paper thin.


Danny Dolan (Spencer Tracy) is a new policeman on the quays. He is an easy going type, saving dogs and bums out of decency and friendliness. Soon he is also making friends with Helen (Joan Bennett) the waitress at the local chowder house. Their banter takes a more serious turn when Danny is called in to deal with a party gone out of hand only to find that it is Helen’s sister Kate’s (Marion Burns) wedding and that they are just having a jolly good (Irish) time.


Kate however has a dark past with a relationship with Duke Castenego (George Walsh), a gangster recently escaped from prison. She is under pressure from the rest of the Castenego gang and when Duke shows up she is forced to hide him in the attic.


But of course Danny catches the bad guys and get the girl and everybody are happy.


No, it is not the story that sells this picture.


It is the dialogue.


The characters, even the minor ones, can hardly open their mouths without firing off wisecrack and jests. They are way too cool for their own good, especially Helen and Danny, which gets them in trouble as well as in each other’s pants. Some of those wisecracks are dated and lame by today’s standard but most of it actually holds up even today. I had a few laughs and Helen gets outright sassy when she wiggles her popo to the music.
The classic scene is of the two of them making out in on the sofa saying one thing while thinking something else as we listen to their thoughts. To keep up their pretence at coolness they stick to their jests and wisecracks instead of speaking their mind and end up in a fight. But do not worry, that is easily enough solved in the next scene when they let down their guard of coolness.
The biggest laugh however belongs to the sidekick, the drunkard. He keeps entering the picture and he is outrageous every time. Picking fights against shadows, falling into the harbor and claiming to save the two policemen who jumped in after him. Going to the same policemen with the complaint that the fish stole his bait and as a grand finale hitting another drunkard in the face with a fish. It is slapstick and it is silly and stupid, but it is also very funny.


Apparently this movie flopped big time back in 1932. According to Wikipedia it set an all-time low attendance record at the Roxy Theater in New York. I must also say that first time I saw this film I did not really get why it is on the list. It did not really seem a strong enough picture for this exalted spot. Second time however I got it. It is really about leaning back and enjoy the dialogue and not think too much of the story. Then the movie lightens up by its own vocal firework.
Posted by TSorensen at 00:50