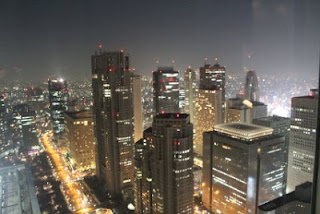 Lost in Translation
I am now breaking form in a big way. Not only am I jumping far ahead, I am also mixing up my comments on the movie with my own personal on location report. The thing is I have just been in Tokyo (I have just arrived in Seoul for the second leg of my trip) and so it was too big a temptation not to trail one of my all-time favorite movies “Lost in Translation”.


“Lost in Translation” is great for several reasons. The most obvious one is the cast. I can see any movie featuring Bill Murray and often he is the reason for me to see a film. He is one of those very few actors who can singlehandedly save a terrible film, but fortunately he usually get good material to work with. The list is very long and I am loath to pick out my favorites among them because it would exclude other excellent films. What make Bill Murray exceptional is his ability to look baffled and his deadpan comments. He is good at being cynical, but his sarcasm is tempered (though still outrageous) and when he is exaggerating I still believe him as opposed to Jim Carrey. Place Bill Murray in a weird situation and you will get the best out of him and this is exactly what “Lost in Translation” do. I only have to look at his face sticking up above a group of Japanese or watch him trying to understand what the Japanese courtesan want him to do (“Lip my stockings!) and I am sold.


Scarlett Johansson is an actress I am gaining more and more respect for although she is not one of those who can carry a movie by herself. I suppose her winning feature is that she usually is a character type I and probably most people can relate to. In “Lost in Translation” she has to look lost to match Bill Murray. That is a tall order but she does it well and I can definitely feel the chemistry between them.


The second reason for “Lost in Translation’s” greatness is all the subtle levels of alienation that the film presents. The two major ones are personal and cultural. Charlotte (Johansson) is having an identity crisis. She is at a crossroad in her life feeling that she has to do something but have no clue what it should be and so she is drifting along. She is entirely alone in this crisis and gets absolutely no response from her family or her husband, the photographer who brought her along to Japan on a job.  Bob Harris (Murray) is the shade of the movie star he used to be and now reduced to endorsing Japanese whiskey. This is of course happening all the time for any celebrity and he is getting a ton of money for it, but he clearly sees this as an uncomfortable job he just has to get over with. He is married, but the marriage has soured into routine and his feeling that he is not really needed in the family. His life and thoughts and those of his wife have diverged and he is as lost as Charlotte.


This alienation gets a more external aspect by placing the two of them in the bustling hub of humanity that is Tokyo. This is not just a humongous city but also a very different place for people of a western origin and mindset. It is not just a different language; it is almost everything that is different. Attitudes, habits, what people eat and do for fun, even the most familiar and seemingly universal is here presented as being outlandish. That is hilariously funny but also serves to isolate Charlotte and Bob. Add to that that they stay high above ground in an island of exclusivity far removed from the world on the Hyatt Park hotel and their isolation is complete.


Having established all this isolation the film then creates all these small bridges between people and across cultures. Bob and Charlotte of course. The two westerners toward the friends of Charlotte when they go to a karaoke bar. Even small things like the hopeless conversation between Bob and an elderly Japanese woman on the hospital that ends in laughter and smiles. These bridges become all the more poignant because of the alienation.


The third reason for greatness is the touch with which this film is made. This could easily have become depressive or a mean mockery of Japanese culture but the film is made with a love for the characters and their culture that the jokes remain innocent. Just because something is weird does not mean it is wrong. This all mean that I as a viewer find myself in a limbo of pleasure watching the story unfold. It seems and feels very light and the depth of the movie sneaks up on you without you hardly notice it.


The fourth reason is how unconventional the story and film is. Besides the genius of placing the story in Tokyo this story could easily have become a simple love story of two lonely people, but it is not. They make a bond and they do kiss in the end, but it is an intimacy of the soul, a friendship, they build and what form it has reached and will develop to is a secret between the two of them that we, the viewer, will never know as we could not hear what they said in the end. In the form their relationship has throughout it is not a threat to their individual marriages, but might actually save those, though in the end we do not know if they have crossed the boundary. That I think is a really elegant touch. 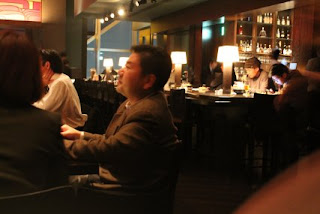 The bar at the Hyatt Park

Around 70% of the movie takes place at the Hyatt Park hotel, so as I was in Tokyo anyway I could not help going there with my wife and a colleague. Not only was “Lost in Translation” shot on location, they used the set exactly as it is. When you go there today you can find the lobby, the corridor, the pool and not least the bar exactly as in the movie. I could even find the table we sat at in the film! On the night we went there a jazz band playing, orders of magnitude better than the one in the film, but that was the only difference. Looking around you see exactly the same kind of people, drinking the same kind of drinks in the same kind of atmosphere. 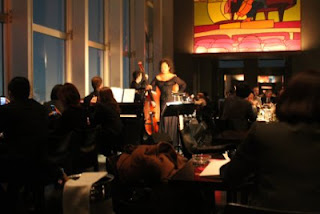 The jazz band was way better than in the movie

The view from the bar is magnificent! It looks like something out of “Bladerunner” and you feel exactly dissociated from the real world outside, precisely like Charlotte and Bob. If you should ever come by Tokyo and is a fan of the movie like me it is definitely worth checking out. Just bear in mind that if you do not stay at the hotel they charge a cover fee. We ended up paying a cover fee of 6600 Yen… 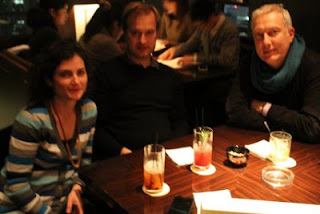 I brought my wife with me to Tokyo like John invited Charlotte. Except for the first day and a half my wife was left alone to explore the city, much like Charlotte and here is maybe my only complaint about the movie. How can anybody be bored in Tokyo? This is a super interesting city and although my wife did not find a Bob Harris she could easily pack her days full and I believe she had a wonderful week. Yes, Tokyo is a crazy place and the Japanese are different, but everybody we met are wonderful people and it is not so difficult to bridge the gap. 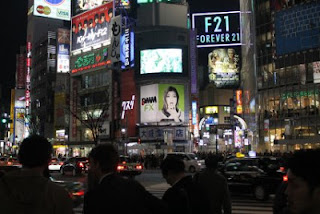