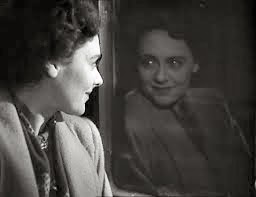 Det Korte Møde
You know how it is when you read about a movie and you think, oh dear, this really does not sound like a film I would like. You read on and learn that this should be a real tear jerker, oh dear oh dear oh dear. Then as you watch the movie this turn out to be the most wonderful movie, painful in a sense, yes, but in that wonderful way that leaves you moved and you are so happy that you overcame that antipathy and saw the movie after all. That was my experience with “Brief Encounter”.

This is a British movie released just after the end of the war and directed by one of British films great directors David Lean, perhaps better known for such masterpieces as  “The Bridge on the River Kwai” (1957) and  “Lawrence of Arabia (1962)”. “Brief Encounter” shares none of the fame of those later movies, nor a host of A-list actors. Instead it tells a narrow, but poignant story, carried out by actors who were the perfect choice for their parts.

Briefly the film is about a married woman, Laura (Celia Johnson) who meets also married Alec (Trevor Howard) in a chance encounter. There is immediate sympathy and they fall in love. However before this affair is allowed to impinge on their official lives they abort their relationship.

Uf, that was too brief, I know. The story is a lot more complex than that. Or maybe not.

The story has been seen as a critique on British morality in the sense that conservative conventions are keeping these two people from fulfilling their lives. My take on it is a bit different. I see the affair as a sort of day dream, a fantasy on the part of Laura. I am not denying that they are real people with real emotions, but this is a story told singularly from the point of Laura. Most dialogue is her narration as she relates what has happened in a fictional confession to her husband. Everybody else, even Alec, are just characters seen from her perspective. They have no more depth than she is giving them.

Laura lives a safe, if slightly boring life. She has a really nice husband. I may take some heat for saying that, but he is a really good man who is also more attentive to her than she may herself credit him and she loves him dearly in that homely fashion that you love family. She has two children whom she loves and cares for, though we hardly see them. Their roles are merely to tell us how settled in middle class normality she is.

When she meets Alec, and it has to be said that he is the active part in that relationship, she is responsive, beneath her self-control because he stirs something unfulfilled in her. He takes her on a dream, to a place she dares not go in reality and as long as it is just a dream that is fine. The problem is when the fantasy starts to have an influence on her reality, when it is no longer just a Thursday escape, but something that makes her lie to her husband and ultimately will require her to reshape her life entirely. At the cost, mind you, of practically all she holds dear.

She bails out, painful as it is, because she ends up acknowledging what is reality and what is fantasy. She has been on a dream voyage, which her surprisingly perceptive husband sense, though unaware of the particulars and he is there to receive her as she is coming back.

I think most people have their daydreams and flights of fancy, and while it is healthy to pursue some of them, others engrossing as they may be should remain fantasies. How far will we allow such double lives to take us? And how real is the gratification they bring? A healthy dose of fantasy may be what takes us through the normality of life and to some extend movies as a phenomenon serves that exact purpose. This movie explores that balance point and Laura almost loses her balance. She does not know Alec, she has no clue what a life with Alec would lead to, but that is almost beside the point for her. She is gratified and alive with him in an exciting way that is like a drug for her. Alec is just the person who triggers it and that is why I think he is not described with any particular depth. We have no clue what makes him ready to give up wife and children for an unknown woman and although he is the perfect gentleman there is a streak to him that makes him push their relationship that may not be entirely wholesome, but again, entirely beside the point. He is there to offer her that dream and as a character he is perfect for that dream.

In a later age’s optic the resolution may seem antiquated. The standard Hollywood message over the past five decades has been to pursue your dreams at all cost, but there I entirely disagree. I think this story is as relevant today as it was in 46, and that is not because I am particularly prudish. I think it is a common enough situation to stand at that crossroad and have to reject a dream because what you really want is not this dream as over powering as it is. The thought of what you really want with your life is important and immensely painful and rarely have I seen a finer example than in “Brief Encounter”.

What really works so well here is the normality of the people and the situation. These are really ordinary people like you and I. Nobody are shouting or venting unrealistic feeling. Oh, they feel, but they feel like normal people feel and I can recognize myself in these people. Maybe it helps that they are British. Although awfully eloquent the mentality of the characters are not far from Danish. In any case the drama is subdued, but no less intense.

The second factor is Celia Johnson. She is just amazing. Her face reflects her narration beautifully. It speaks volumes without words. It is happy, embarrassed, desolate or angry in such an artless and natural way that we almost do not need the narration. When the abhorrent Dolly interrupts their final parting Celia’s face could kill. We know that that woman is inches from strangulation even without the narration. Also in the recurrent glimpses we get in the home living room as she is recounting the story for us her face goes through all the emotions and that is not wasted at all on her husband. When he comforts her at the end we believe that he really does understand although he has not heard a word, because we have seen her face and know how well it tells the tale.

I am very impressed with this film and I feel like watching it again right away. I have not even commented on the subplots, but really they take second stage to the drama unfolding. I thank you, editors of the Book, for forcing me to watch this movie and promise I will be nicer to you in the future.