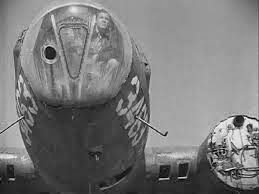 De Bedste År
One thing is to win the war, another thing to win the peace. You would think that fighting a war is the hardest challenge, but I have come to think that the battle after victory may be even harder. How many movies have we seen about returning veterans who cannot just slip back into their lives? How often has the ending of a war triggered a general depression, not only for the people involved but for the society at large. And we are not just talking the losing parties. In fact they may be better off because they have something to actually rebuild.  No, fighting with guns is in many ways the easy battle (though more likely to kill you).

The first of the issues mentioned, that of returning veterans is the subject matter of “The Best Years of Our Lives” from 1946. This movie was made right at the end of the war and relates to the homecoming of three American soldiers to their common hometown. Stop to think about it for a second. The war ends in August 1945, Samuel Goldwyn orders a screenplay made, Billy Wilder starts filming in April 1946 and the film is ready for the 1946 Academy awards and not just ready, it practically cleans the table. That is serious turn-around. When this film came out the subject matter was reality for hundreds of thousands of returning personnel, who no doubt saw themselves portrayed in Al, Fred and Homer.

The Book makes a big issue out of declaring that the story is antiquated to which I can only shake my head. The only thing antiquated about this film is the forced happy end of the film, which I will return to later. In every other way this film is as relevant today as it was 68 years ago. Going to war changes people, if for no other reason than being away from home for an extended period. For most people it is a lot more than that. In war you see things and may have to do things that people at home would never understand. “All Quiet on the Western Front” has some excellent scenes showing that and “The Big Parade” continued that theme, both in relation to WWI. For many soldiers their fellow brothers in arms are more family to them than their relatives and loved ones at home, simply because they share the experience. Home on the other hand becomes a pink tinted myth, a dream that represents everything the war is not and a dream reality could never live up to. I believe it matters little if the war is WWI, WWII, Vietnam, Iraq or Afghanistan. The pattern is much the same.

Al, Fred and Homer are returning back to Boone City, which I take is some Everytown in the American Midwest. They face a different reality in more ways than one. When we meet them Fred (Dana Andrews) is the dashing officer, a captain in the air force with looks and style to match. Al (Fredric March) is a sergeant of the infantry, a grunt, if a bit grandfatherly and Homer (Harold Russell ) is a mechanic (petty officer) from a carrier. Their military ranks place them neatly in order, an order they easily fall into although the war is over and they have all been decommissioned. So much more the surprise when their civilian rank kicks in and we learn that Al is a wealthy banker, Homer belongs to a middle class family in the suburbs and Fred returns to an alcoholized father in the slums. In civilian they are entirely different people. That alone is pretty shaking.

However each of the three has their own battle to fight, battles which are not entirely uncommon.

Homer lost his hands when his carrier went down and instead has two hooks. He is surprisingly skilled at using them, but he is painfully aware of his loss. What is worse is that his family is, not surprisingly, quite stunned and does not know how to treat him, which makes him even more aware of his handicap, especially in relation to his childhood girlfriend Wilma (Cathy O'Donnell). Harold Russell was an authentic veteran who really lost his hands and that lends a lot of credibility to his character.

Al returns to a family who grew up without him. I do no sense any resentment in them, but Al is painfully aware that he does not know them as well as he should. The first part of the film makes a lot of showing his fear at reassuming the distinguished and responsible role he is returning to and leaving the grunt behind. I am not too sold on that though. The man has been married for 20 years and he should know his wife (Myrna Loy) if not his children pretty well. The more interesting struggle is in the bank. Being a grunt gave Al a different perception of people as actual humans rather than risks, assets and liabilities. This makes him rebel against the cold and ruthless world of banking to the chagrin of his superiors in the bank. Here is clearly a message from the director to the financing world and one that was actually carried on a very large scale with the Marshall plan in the following years. An idea that largely prevented much of the misery and woes which followed WWI.

It is however Fred who is the really interesting fellow to watch. For him the change from gentleman officer to working class inferiority is quite a shock. He came home with a middle class dream and finds him at the losing end on every account. As reality kicks in he somewhat comes to terms with it, but we can see the pain when he accepts the low pay and low status job behind the counter in the drugstore. If that was not bad enough his private life is a mess. When he left for the war he was 20 days married to a bombshell of a girl he hardly knew. When he returns Marie (Virginia Mayo) works in a night club, enjoys an extrovert lifestyle entirely at odds with Fred’s appetites and clearly has no intention to return to the gutter or the mediocre middle class lifestyle Fred is aiming for. In a sense I do not blame her. They are just a hopelessly poor match and when the glitter of an officer husband wears off she sees no further use of him.

This is the line-up of the movie.  It is a glorious setting and I am entirely sold. It helps a lot that the film is deliberately slow (almost 3 hours) giving us time to actually know these people. There is a tenderness in the storytelling that we see in glimpses which are only possible because the film takes the needed time to show them. Like the flight across the land with the three soldiers in the nose of the plane, looking down at their fate. Or the scene where Wilma buttons Homers shirt. There is so much feeling in that scene that it is beyond sex. This is extremely intimate, yet so subtle. One of my favorite scenes is Fred on the plane junkyard. Seeing all the decommissioned planes he realizes how he himself has been decommissioned. He is like these planes and working with them is both a nod to his officer-self and a final embrace of his civilian self. It is very exquisite.

Then of course we have the resolution of the story. Al’s daughter Peggy (Teresa Wright) and Fred, Wilma and Homer and to some extend Al and his wife Milly. This is the romantic element and it is a story engine, but its fairy tale character is somewhat at odds with the harsh and brutal story of homecoming soldiers. It is very much a product of its time, but it also changes the film from a slap in the face to a feel good experience. I understand why it is done this way, but a part of me wishes they had not.

“The Best Years of Our Lives” sets an interesting and always relevant premise, presents it beautifully, but ends up with the easy solution. I am happy to have seen it and it deserves its Oscars, but oh, what they could have done with this story had they dared.