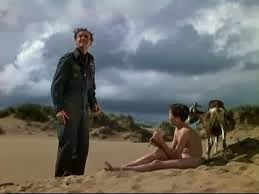 A Matter of Life and Death
“A Matter of Life and Death” is the story of an English pilot, Peter Carter (David Niven with his trademark pencil moustache), who miraculously escapes death when his plane crashes in the final days of WWII. In the final minutes before jumping the plane he has a, what he thinks is a last, conversation with an American radio operator, June (Kim Hunter). Emotions run rampant and they fall in love over the radio and when Peter, having survived a jump without parachute, looks her up they quickly become a solid couple.

Problem is that Peter should have been dead. Conductor 71 (Marius Goring), a fompish French dandy of an angel, lost his way in the fog and failed to conduct Peter up to Heaven. Now he is missing and that will not do. Conductor 71 is sent back to finish the job only to find that Peter’s life situation has dramatically changed. Peter asks for an appeal and a such is granted at the heavenly court.

In the real world Peter and June are deeply concerned with the strange appearance of angels and talk of death so they look up Junes friend Dr. Frank Reeves (Roger Livesey) who happens to be a famous neurologist. He is in turn convinced that the talk of death and angels is indicative of a brain disease (tumor?) and the appeal court is a surrogate for his body fighting the illness. He encourages Peter insist on winning the appeal while he sends him on to a brain surgery.

Frank, who as a brain specialist should know better, rides a motorbike without a helmet and on the fateful night he crashes into the ambulance come to pick up Peter and so Frank enters the gates of Heaven ahead of Peter. This however solves Peters immediate problem of finding a defense lawyer. Dr. Reeves is the obvious choice and so he leads the case against the charges of a sinister Abraham Farlan (Raymond Massey) of the prosecution.

I am very torn on this film. The first hour is excellent, if pumped into overdrive on the romance.  Niven, Hunter and Livesey are all excellent and the story has that dual thread of reality with a possibly fatal brain disease and the supernatural heavenly element that might, might not be imagined. I was amazed how smooth it was and how the story just rushes ahead. I am not so used to that and that is largely a tribute to the actors and set design.

Then about an hour in the movie changes gear and become a court drama, but of the most ridiculous sort. No fault of Raymond Massey. He is again excellent and the pompous role fits him. But there are so many things going wrong here. First of all the whole concept of the court. Considering that Heaven is supposed to exist outside of time and space it is surprisingly anglocentric. Everything is English and American and people or references outside the Anglo-Saxon world is only included as they relate to it. For instance there are no modern Germans in Heaven and the court in Heaven look and works like the Old Bailey. Now that could be explained by this being imagined by Peter as an Englishman. We all create our mythology in our own image.

Secondly Peter wants to extend life because he has fallen in love. That is nice. I am sure there are millions around the world who would like an extension of life on that behalf, but here it is all about proving the love. It seems to me that the romantic engine of the film here has run completely amok. It is of course sweet, but almost perversely so. It is the “love conquers anything” concept taken so far out that it just gets rather annoying. As a pretext the “if you are truly in love you do not have to die”, to me it is just a bit lame. I am too cynical for this film clearly.

All this however would certainly work on the pink pages of a women’s magazine and certainly there are plenty other films toying with those ideas. The killing point here is that the court is presented as some sort of contest between British and Americans. The prosecution and the defense are throwing all the national clichés at each other and Farlan’s main point is that the British suck and because Peter is British he has already lost, especially when it comes to getting an American girl.

I do not get this pissing contest. It is stupid and irrelevant for the story and smells of national inferiority complexes. There is a level of humor to it that I do get and which makes it possible to get through the procedure, but it so annoys me that a film that started out so nice ends up so stupid. Even if we assume that the entire heavenly court is a surrogate of Peters medical struggle I really do not see where the national pissing contest comes in. Oh, yes, we all love our national stereotypes, but it is just so stupid here.

Ah, getting that off my breast I can return to what I really like about this film: the set design and Roger Livesey.

I think the choice of making the earthly world in color and Heaven in black and white was genius. It is the opposite of “The Wizard of Oz” and it allows Heaven to be truly other-worldly. The color photography in our world was at the same time outstanding and with a slight rewriting of Conductor 71’s words, you do get starved for Technicolor. On top of that the film uses some interesting freeze frames that are nothing short of spectacular. Characters walking around the frozen images of other figures, that is just magic.

And Roger Livesey just gets better and better. His voice is so pleasantly British that I just wish he would keep talking. Thankfully he does not have to pretend he is Scottish so he can run his part full throttle. In a film with excellent performances his is the standout.

Conclusively I do not know where I land with this film. Part of me loves it, the other part is truly annoyed by it. Maybe I am of the wrong gender or age. Maybe ít is a British-American thing. I do not know. This film made it halfway there for me.