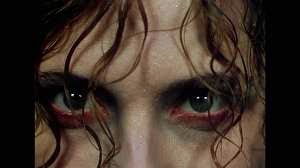 Den Sorte Lilje
Only few minutes into ”Black Narcissus” one thing was very clear: I was in for a cinematic treat. “Black Narcissus” won some of the most well deserved Oscars for it’s cinematography and art direction and all through the movie we are treated to the most extravagant display of cinematographic superiority. I am flat down on my stomach, this is by far the most beautiful film I have seen so far on the list.

To start with it is in Technicolor. Powell and Pressburger had already shown us what they can do with colors in “Life and Death of Colonel Blimp” and again in “A Matter of life and Death” and thanks to the excellent combination of head of photography Jack Cardiff and art director Alfred Junge they reach a peak with “Black Narcissus”. The colors are not just beautiful, they are also used to dramatic effect. There are color filters to reflect moods, cold colors, warm colors, haze or clarity and at a critical point, pang!, a very red dress, lipstick, pale skin, drama and violence.

Secondly they manage to create this mountain recluse of a convent in the Himalayas. A solitary structure impossibly clinging to the rocks with a sheer drop of hundreds of meters to the valley below. Vistas all-around of the most dramatic mountainscape imaginable. It is gorgeous, dramatic and not without a hint of Shangri-La. The place is populated with native Indians and the recluse itself is painted dramatically with erotic dancing scenes reflecting its former use as housing for the ruler’s harem. Shockingly all this is just an illusion created in the Pinewood studios in England, but it is so real that they got letters from people in India who recognized the place! Just amazing.

Any review of this movie must first of all relate to this astonishing feat of cinematography, and frankly I would be happy if this was all I got from the film, but there is a lot more to it.

It is the story of a group of nuns led by sister Clodagh (Deborah Kerr) who has been sent out by the sisterhood to create a convent at this remote location. The local leader, the General (Esmond Knight), has graciously lend them the use of this old palace/fortress/recluse after a group of monks gave up their mission. The General’s agent is an Englishman called Mr. Dean (David Farrar) and he is the contact point for the sisters.

This is a clash from the beginning. The nuns are almost the definition of repression and control with their white, tight and elaborate outfits and a total submission to their vocation. Even for nuns this group of sisters seems particularly bent on ignoring all outside distraction to focus on their dedication to work and prayer. Mr. Dean is the exact opposite. His cloth is in disarray, his hat would look shabby on a hobo and his easy manner speaks of a man who takes it easy. 20 years later he would have been the local hippie. He is also a representative of this place. Everything here is about loosening up and be honest to yourself. The locals are artless and honest, the nature is brutal and beautiful and there is something very intoxicating about this place. The erotic paintings on the wall seem quite natural here.

Much of the enjoyment of this film is watching this clash unfold. The poor sisters start to unravel, not in the sense that they become unhappy, but their determination for denial is challenged in a big way, almost as if this place is ruled by a different god , one with different rules than the one they are used to. Sister Clodagh is desperately trying to keep the sisterhood under control, but she is also haunted by dreams and thoughts from a time before she joined the sisterhood. I enjoy all this, not because of some mean streak in me against nuns, but because it is such an interesting personal conflict which here is lifted up from being just personal to a general conflict. It asks the nuns if this is really what they want, it moves them to see a greater world of beauty and passion and a divinity, which is not covered by their interpretation. At some point Sister Clodagh asks Mr.Dean in exasperation what to do about these locals besieging their world and he replies “Do what Christ would have done” implying that their true calling might be something else than what the sisterhood calls for.

The sisters are also a colonial intrusion into a world that has done fine without them for thousands of years and we sometimes get this feeling that the locals are looking at the nuns bemused, wondering what to make of them. There are two most interesting representatives of the local culture. One is an Indian girl called Kanchi. She is the embodiment of sensual eroticism. She does not say anything, but dance invitingly, look at men with unhidden desire and seems to belong far more than the nuns in this palace. It took me a long time to realize that this is actually Jean Simmons. Really, I could not recognize her. For a long time I was convinced that this really was an Indian girl.

The other representative of the local culture is the son of the General (Sabu). He is a young man very intent on learning all he can from the nuns. He embraces their culture with fervor, but in the end turns away from them in favor of Kanchi. Just to put a big fat line on how alien and misplaced the sisterhood is in this environment.

The story reaches a dramatic height when one of the sisters break down completely. All the sisters are losing it collectively, but Sister Ruth (Kathleen Byron) becomes utterly mad. She was already chaffing under the constraint of the sisterhood when they left for this place, but it comes to a blow as she breaks the bondage. The scene where she steps out wearing a bright, deep red dress instead of the white and serene outfit of the nuns is so dramatic and erotic. There are sweat drops on her forehead and her lips are curled in a snarl as breaks free. She is a fury, a mad force of sexual energy who like a chain lightning storms around wreaking havoc. My favorite scene of the entire movie (and there are many to pick from) is Sister Ruth emerging from the door with wet hair, a pale face and eyes bent on murder. There is so much energy in this picture that you cannot help gasping. Wow.

I have in the past enjoyed the Archer movies, but always had that little “but”. Here there are no “buts”. This film is a master piece and I can only recommend to anybody who cares to listen. “Black Narcissus” is an interesting story about fundamental questions wrapped in a production that is just mindboggling.