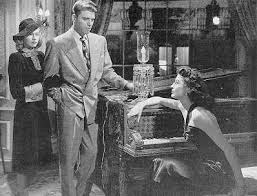 Den Der Hævner
It is time for another film noir, and, no no, I am not at all getting fed up with this theme. Certainly not when it comes in this quality. Robert Siodmak’s “The Killers” is an excellent example of what a film noir can be. I have come to think that the classic film noir tropes are not really that classic. There are no certain elements that must be present in a noir, it is just that some key noir employed them so that has come to typify film noir. By now I believe it is simply a matter of mood. A noir vibe of darkness and this is something “The Killers” have in spades plus a lot of interesting twists on the tropes.

Just take the opening. Two gunmen arrive in a small town. In the diner they do not even pretend to hide who they are. Their menacing ways soon have waiter, chef and patron cowed before the gunmen move on to seek out the Swede (Burt Lancaster), a gas station mechanic, and fill him up with lead. The special noir’ish element here is that the Swede simply accepts this. From being a gangster flick this immediately has turned into a fatalistic and dark film about loss, deceit and violence.

Enter Jim Reardon (Edmond O'Brien) a claims investigator from an insurance company who has to find out what happened so the insurance on the Swede can be paid out to the beneficiary. Reardon is, as the Book also points out, our representative in the film. He is the observer from the outside who is as baffled by this story as we are and soon finds out that this story is a lot deeper than just paying out 2500$ to some woman in Atlantic City. Reardon is drawn into the story and finding out how it all adds up becomes an obsession and so the observer becomes an agent in a very dangerous game.

I am certain that Robert Siodmak and his script writers saw and were very influences by Orson Welles “Citizen Kane”. There is a very clear parallel in the format of the films. Also here our observer is piecing together a puzzle by interviewing witnesses and players and through him we learn what has happened. This is a sort of flashback, sort of narration that could be called noir, but a Welles take on it. I think it is extremely elegant. We just learn enough with each step to sink a notch deeper into the story, but not anywhere clearer on what actually happened. When we finally get the reveal in the end I was surprised. It makes perfect sense but I did not see it coming.

It is almost a shame to explain the story because learning of the plot in the movie is an essential part of the fun. I will be circumspect and try not to ruin that fun.

The Swede was a guy of Swedish origin (duh) called Pete Lund. I would have loved a Fargo dialect on him, that was the only fault I could find with Burt Lancaster. In his past however the Swede went by the name Ole Anderson and was hopeful boxer. One fateful evening however he broke his hand and that changed everything. His boxing career over he turned from his friends and sank into the underworld. The magnet was a beautiful woman named Kitty Collins (Ava Gardner).  Eventually the Swede gets involved in a big and apparently successful heist and that event is at the crux of a drama of greed, deceit and double crossing.

It is complicated, but all the ends ties up in the end, which is satisfying but also a bit sad. Even sadder is that the successful resolution of the story results in a minor reduction is the insurance premium for the coming year, almost as if it was hardly worth it to uncover the story.

Ava Gardner as Kitty Collins is worth some comments on her own. The first time we see her she is exceptionally beautiful and alluring and it is not difficult to see why the Swede literally ditches his girlfriend to court this goddess.  In this sense Collins is the femme fatale that ruins people, morally if not financially. She is also unscrupulous and manipulative and thus fits the bill of the classic noir woman. But in a sense I think it is a bit unfair. She is no worse than the rest of the gang she hangs out with. They are all mean gangsters who use whatever tool works for them. Collins has her good looks and a low morale, but Colfax (Albert Dekker) is the real bastard here. However because of her gender Collins is considered particularly poisonous. Still she is just a tool.

Another interesting twist on the noir tropes is that it is not our lead who is heading for destruction. It is the subject who is. This might make it easier to watch since we do not have to sympathize to the same extend with the Swede, but it makes it no less interesting to follow and no less dark.

Solving a mystery is interesting, but rarely has it been this engrossing. I really enjoyed this one and hope there will be more Robert Siodmak coming my way.