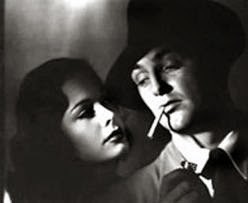 Fanget af Fortiden
I do not know where to start with my review of ”Out of the Past”. I am still juggling the pieces around in my head and there is a real risk that this will be one of the more chaotic reviews. Right now the only word that is really in focus in my mind is:

This got to be one of the best, maybe the best, film noir so far. I thought it would be difficult to top the other noirs on the List but I think this one just did.

I have already seen a few movies from director Jacques Tourneur (“Cat People” and “I Walked with a Zombie”). He excels in dark ambience, but his previous films were cheap productions and you notice it. Not so “Out of the Past”. Here production value is much higher on every account, not least on the actors, and matching Tourneur’s skill for dark ambience with production value is a marriage in heaven (or hell in a sense). There is a pervading gloom and fatalism in the film that can only be described as film noir. In fact if somebody would ask me to point out the quintessential film noir I would not hesitate to name this one.

Take Jeff Bailey (Robert Mitchum), the lead character. He is a tough nail on the outside and really smart on the workings of the underworld, but beneath the surface he is a romantic with integrity. Add to that a casual and fatalistic attitude and you have the archetypical noir hero. Jeff is really super cool about his “job”. Not that he is careless, not at all, but he is so dry and casual that he screams competence. That is also necessary because he is up against some badass crooks.

While it is pretty clear that they belong to the shadier side of society it is not so clear from the outset exactly what they are and do. That is part of the Noir feel. We are always a little off-balance about what is going on and we only gradually learn who these people are. Whit Sterling (Kirk Douglas) is the king pin of course. He is so sleek in his expensive suit and shiny, tight haircut. He has the joviality of the super-rich and a brutality to match. A dangerous man to cross clearly, but exactly how dangerous we only gradually learn. He has a goon named Joe Stefanos (Paul Valentine), but he is harmless compared to his dame.

Talk about an angel and a devil is the same person. Jane Greer as Kathie Moffat is everything you want from a noir femme fatale. Of course she is divinely beautiful and able to get into the pants of any man simply by looking at him. But she is also a vicious and cynical bitch who has no loyalty and no scruples whatsoever as long as she gets what she wants. Clearly she means disaster for every man who gets within her reach. This is literally so, I think I can say without spoiling too much.

So, what exactly is the plot of this film? This is where things get complicated and frankly I will not reveal too much about it because the unfolding plot is one of the many assets of this film. It is complicated, not with as many loose ends as “The Big Sleep”, but close. The difference is that events here are not as random. Everything makes sense; we are just not a witness to everything.

Jeff Baily lives in a small town and has a respectable job running a gas station, when a person appear Out of the Past. Almost like a rerun of the opening of “The Killers”. The person is the goon Stefanos and the message is that the boss wants to talk with him. The first half of the film is then Jeff telling his new girlfriend why it is he has to meet this man (Whit) in narrated flashback of course. Jeff took a job as a private detective to find and bring back Whit’s woman (Kathie) and the 40.000$ she took with her. Jeff and his partner took the job, but when he finally found her in Acapulco he forgot all about the job and ran away with her. That ended… badly, and now he is hiding in this little town in the middle of nowhere.

The second half of the movie is what happens after Whit and Jeff have a little talk. Whit is not mad at all. Kathie came home and everything is good. Now he just needs Jeff for a little job concerning some tax papers  that needs to disappear. But Jeff can smell a trap when it is thrown into his face and he spends the rest of the film trying to avoid it. This part is really intense. It is murder mystery, strange alliances, backstabbing and beautiful dames. All you could ever want from a noir.

It is so curious to see Robert Mitchum as a young man. I am so used to see him in his old age that it is really weird to think of him as young. But he was quite dashing. He looked very much like a young John Cusack. Apparently this movie kick-started his acting career and I understand why. He fitted his part like a hand in a glove.

This is also the first time I see Kirk Douglas on a List movie. Yes, the super star who would play Spartacus with his famous chin and win a ton of awards here and there. But in “Out of the Past” his is in a supporting role as villain and man he was good at that. It is no wonder that his son worked so well as a Wall Street shark.