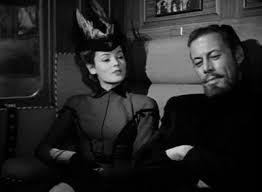 The Ghost and Mrs. Muir
Here is a movie I went into absolutely blank. Usually I can and do read up on the movie of the night in the Book, but not this one. The Danish edition I have has replaced it with a Danish movie and the latest (10th) edition has removed it altogether. That is not a very promising start. Two different sets of editors have decided that this movie might not be that important after all.

Well, it may not be “Gone with the Wind”, but maybe my total unpreparedness for the movie made me quite receptable. I did find this movie very entertaining and rather charming.

“The Ghost and Mrs. Muir” does a bit of theme surfing at the opening. When Lucy Muir (pronounced Mrs. Miur) in the shape of Gene Tierney arrive at the desolate Gull Cottage by the sea with her daughter Anna (Natalie Wood as child Anne and Vanessa Brown as adult Anna) and maid Martha (Edna Best) they find a haunted house. We get some effective horror effects and a creepy ambience and I mentally prepared myself for this sort of film.

It is hardly a spoiler to say that there is a ghost in the movie and that this ghost is rather important. It may however be a surprise that the ghost is supposed to be real. At least that is the premise of the story. Usually ghost in older movies are explained as an illusion or fantasy, but this one is the real thing. Cottage Gull IS haunted.

At this point the movie changes gear because our ghost turns out to be a boisterous sea-captain about as harmless as Casper, The Friendly Ghost. When Lucy stands up to the ghost instead turning tail is becomes clear that this is a comedy rather that a horror story. Watching Lucy face off this blistering old fart of a ghost is actually quite hilarious.

Captain Daniel Gregg (Rex Harrison) used to own the house and is keeping everybody away through his haunting. He wants it turned into a home for retired seamen and Lucy better leave like all the rest. But Lucy has other plans. She is a recent widow to a man she did not love and an escapee from her horrible in-laws. She wants to live in this house so the captain better get used to this.

It turns out that these two characters actually like each other and gradually the movie takes a second turn into romance territory. A love story with a ghost… hmm… I think I have seen that before. The difference here is that there is a gentle touch to the story. We are in Victorian days at the turn of the century and in England no less so even relationships between people of body and flesh have a certain platonic and hands-off feel to them. A relationship to a ghost is really not that different. But more importantly there is little of the over-the-top melodrama and that love-beyond-death drivel those stories are usually dribbling with. This is largely due to the captain’s direct and no-nonsense attitude and Lucy’s backbone.

Their project together becomes a book that Lucy writes about the life of Captain Gregg. It is a brash and masculine book and not at all what you would expect from an English lady. This of course makes it a success so Lucy get the economic basis for staying in the house, but I think the underlying idea is that Lucy is projecting a suppressed side of her into the book. Subconsciously she wishes she was out there on the high seas, away from a demeaning and chastened life and since she otherwise keep herself under tight reins she must have another outlet.

Curiously this is also the road the movie takes when Lucy later on meets a real flesh and skin man. Although Captain Gregg is initially opposed to this guy he eventually chooses to disappear from her life convincing her that he was indeed just a figment of her mind, a fantasy she was living. Interesting how the symbolism of the film thus becomes literal.

Speaking of this new man he is a real jackass. Miles Fairley (George Sanders) is writing children books under the name “Uncle Neddy”. Just listen to that name. So creepy. We know he is slime, Anna and Martha know he is slime, Gregg hates his guts, but Lucy is enamored by his sleek manners. I suppose he appeals to her rebellious Victorian mind with promises of erotic adventure the same way that the ghost and the book offered an escape to the high seas. In the end however Fairley is also an illusion and luckily she gets out of that one unharmed. Unfortunately it also means that she now resigns herself to her little Victorian prison/heaven in blissful solitude.

I liked this movie more than I expected and it is still growing on me. The more I think of the character Lucy the more interesting she becomes. Her attempts to get out of her shell are poignant and told with a subtlety that seems more in character of British films than American films and certainly light years better than “Peter Ibbetson”.

Gene Tierney I last saw in “Laura”. What a remarkable difference! Though I truly liked “Laura”, I felt that Tierney was wrongly casted for that movie. For “The Ghost and Mrs. Muir” however she was perfect. I read that she eventually suffered misfortune professionally and personally, but this movie is long before that happened. Poor girl.