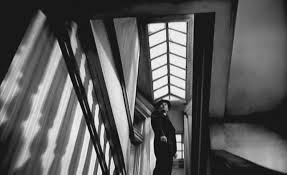 Force of Evil
This may not be one of my best reviews ever. I am in Tallinn, Estonia attending a conference and I saw this movie in segments, mostly during a grueling flight Sunday. I was tired, getting up at 1.30 in the morning does that to you, and I am not sure I gave the movie the attention it deserves. Had this been a run of the mill braindead flick that would hardly have mattered, but this is a convoluted story with a vast amount of characters of which many are obscure to say the least. Even under optimal circumstances I am not sure I would have caught all the finer points of this film. As it was I am seriously doubting if I am being fair to the movie writing a review on this basis.

The central figure of the film is Joe Morse (John Garfield). He is a hot shot Wall Street lawyer who has found a way to make tons of money. In many ways he is a 1948 version of Michael Douglas’ Wall Street shark. He is sleek as an eel and convinced that money is the only true value in life. Joe’s main (probably only) client is a fellow named Ben Tucker (Roy Roberts). He runs a numbers racket in the gray (dark gray) area of legality. I am not sure I entirely understood to operation, but it was something about that people could deposit money in a “bank” and if a certain number came out they could withdraw a small fortune. If that is not gambling or at least a lottery I do not know what it is. This kind of operation is apparently officially illegal but a number of small “banks” are operated out of apartments and back offices and they are tolerated. Tucker’s scheme, if I understood it right, was to let the number 776 come out on the fourth of July. Since tons of people would have played that particular number it would effectively ruin those banks and force them into the hands of a Tucker gambling imperium.

Joe’s role in this operation is to be Tucker’s operating arm and make the whole thing legal or at least appear legal. I did not understand how this is possible, but that has always been the job of shady lawyers anyway.

Joe is good at it. He is competent and cynical and definitely the right man for the job. Except for two weaknesses.

Weakness number one is his brother Leo (Thomas Gomez). He operates one of these small “banks” and has a weak heart. Surely it would be bad for him if his operation would bust. As cold and badass as Joe may be he does have a weak spot for his brother. He wants to protect Leo without giving the scam away and so he embarks on a tightrope mission to some get Leo out of business before it is too late and when that fails set him and his crew up as administrative staff for the new conglomerate operation.

Leo is in many ways the exact opposite of Joe. He is an honest guy who speaks straight out of the bag. He is big and clumsy and probably not the best or smartest business man in the world. He run a gambling operation, yes, and it is likely on the wrong side of the law, but the office looks more like an employment project for misfits and social outcasts as if he gave them a job where nobody else would. The symbolism is quite clear: the sleek and legal lawyer whose soul is black as coal and the criminal gambling operator who is actually a social worker with a consciousness and a good but fragile heart.

Leo wants nothing to do with Tucker’s gangsters and nothing Joe can say or do can sway him. As it becomes clear that the gambling bank is being taken over by gangsters there is open rebellion from Leo’s staff and one after another tries to get out of it. Joe is a witness to the deroute of Leo’s operation and slowly his façade is cracking open. Instrumental in that process is Doris Lowry (Beatrice Pearson). She is the good girl who became the secretary of Leo, but now just wants to get out of it. Unfortunately she has been stigmatized as she was there when the police raided the bank and so she needs Joe as much as he is finding out he needs her.

If this all sounds rather complex and confusing then I got it about right. As the movie progresses events spiral out of control of Joe and also of me as the confused viewer. Tucker’s rival Bill Ficco (Paul Fix) appears and wants a slice of the cake. Tucker’s wife has a strange obsession with Joe. Leo’s bookkeeper, a feeble man named Bauer (Howland Chamberlain) falls into the clutches of a gangster (Ficco, I think) and decides to wreck his own damage by giving anonymous tips to the police and somewhere in this Joe’s other weakness materialize.

If I understand it right, and now I am on thin ice, Joe is facing a rebellion from within his own legal office as one of his partners (or employees) are going against him. It would appear his secret phone is tapped and that the police, somebody named Hall, is on to him.

I am sure there are a lot of interesting themes going on here, and I am sure a re-watch would make me a lot smarter, but I am not sure I feel like it. This was not a movie that really appealed to me. It felt like a slow implosion. It was about a guy who thought himself above mere mortals but found out that he was in reality much less. That all he was, status, wealth, integrity, skill, were all illusions and delusions and really worth nothing. Interesting but also very depressing really. I could not root for Joe and Leo was a lost cause. The only sympathetic character was Doris and she was as caught in the web as everybody else and therefore part of and in the implosion.

The Book mentions the style of dialogue and a number of stylized elements. I was probably too wasted when I saw it cause I did not really find any but the fact that all characters were painted a bit too sharply. They were almost caricatures of themselves, but I am not sure that was such a positive thing.

I was probably just too tired.