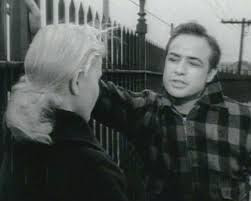 The big Oscar winner of 1954 was ”On the Waterfront”. It won in eight categories including most of the big ones: Best Picture, Best Director, Best Screenplay and Best Actor. The only reason, it seems, that it did not win Best Actress was because the female lead, Eva Marie Saint, was considered supporting, a category she won. In other words, this was the “Titanic” or “Gone With the Wind” of 1954.

I never saw it before and with such acclaim I had some very high expectations to this movie. I think that it quite obvious. Also this movie has been recommended to me left and right as a must-see.

And the verdict now I have finally watched it: Yeah, it is good. In fact, it is a damn good movie. And what I really like about it is that it is good in those old-school categories that really matters to movies: The story, the acting, direction, cinematography and not least relevance. This is not a gimmicky movie on a monster budget. If anything it is scraped together, but with such skill that it feels like a lot more.

On the docks of New York there are a group of men doing the hard work of loading and unloading boats. It is a tough and grimy job for hard men and what makes it even harder is that their local union is totally rotten. Instead of supporting the workers their union is exhorting them and generally acts as a crime syndicate. The leader of the mob is a disgusting fellow called Johnny Friendly (Lee J. Cobb) and he is decidedly not friendly. His henchmen includes the two Malloy brothers, Terry (Marlon Brando) and Charley (Rod Steiger), Friendly’s lawyer.

Friendly stays in power through a reign of terror. Opposition means exclusion from the jobs and silence is ensured by killing off those who might go to the police. It is exactly at such a killing we enter the movie. Joey Doyle has spilled his guts about the syndicate to the crime commission so now he has to die. Terry, who is an ex-boxer and portrayed as a bit slow on the uptake is instrumental in this, but also surprised that Joey had to die. His second thoughts gets another notch when he falls in love with Doyle’s sister, Edie (Eva Marie Saint), herself on the mission to find out who killed her brother.

Terry find himself torn between protecting the only friends he ever knew and helping Edie and the priest Father Barry (Karl Malden) bring down the gangsters. He ends up choosing the later and that is not without problems and danger.

The setting on the dock is incredibly real. It is cold and grey and you can almost smell the oil and soot. Elia Kazan used a lot of location shots and it paid off big time. The realism of the setting is almost half the movie. It was aided greatly by the acting performances. Kazan’s troupe comes primarily from the method acting school which allow for very realistic acting. This was especially the case with Brando. He owns that role, not through intense acting, but simply by being that person. It is incredibly powerful when you see it because it works in all those small details that makes a person real, what they do with their hands, how they walk, where they look and so on. Not for a second does it look staged. Though not in his league the rest of the team follows suit and this works particularly well for the dock workers. If I did not know better I would say Kazan hired the local dock workers for the job (and maybe he did for some of the extras).

Eva Marie Saint is less convincing than Brando in her acting, but is compensated by the way she is presented. She is a blond beauty, but with her paleness, lack of makeup and drab cloth she looks worn and tired and determined and that makes her convincing.

I would be quite surprised if Kazan was not just a little inspired by Italian neorealism. In the same way the German invasion of Hollywood in the twenties and thirties brought expressionism to the big studios so did neorealism slowly sneak into the movies in this period, a style which only reached its heyday in Hollywood in the seventies. For this reason “On the Waterfront” looks and feels twenty years ahead of its time.

I have read and heard a lot about how this was Kazan’s defense for witnessing before the Committee on Un-American Activities. According to this idea Kazan identifies with Terry who decides to betray his friends because of the crimes they did. In this respect this would make it the reverse of “Johnny Guitar”, who criticized the prosecution. I can of course not tell if this is really the case, but I find the case a lot weaker than with “Johnny Guitar”. The allegory would compare socialist work in the movie industry with outright gangster activities. As scared as America was of communist infiltration I doubt most people would go so far as to call them gangsters and in hindsight it just sound ridiculous. Ironically the movie encourage the dock workers to work together against a system that is preying on them. That is a pretty socialist idea.

So I am not so impressed with the allegory and actually prefers to ignore it. This is a damn good movie that tells a compelling and relevant story and that is plenty for me. I am very impressed with this movie and without having seen the other contenders for the 1954 Academy Award this is a movie that deserves its accolade.