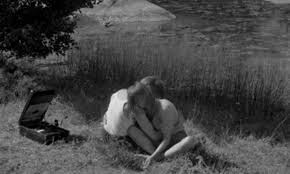 Ingmar Bergman is one of the directors with most titles on the List. The record I believe goes to Hitchcock, but Bergman is not far behind. In fact the main reason Swedish films are well represented on the List is largely due to Bergman, a sad fact that the Danish edition tried to remedy by adding a few titles less known outside of Scandinavia. I am not in a position to say if this exalted position of Ingmar Bergman is deserved because, ta-da, I have actually never watched a complete movie of his. The closest thing is fragments of “Fanny and Alexander” and I remember not liking it, well, I was very young. So, having revealed my absolute ignorance I have now embarked on a journey, which over the next years will take me through a fair sized segment of Ingmar Bergman’s catalogue, and the first title is “Sommaren med Monika”.

Straight off the bat I will admit it was a difficult movie to watch. I got the feeling early on that this was going to end badly and that always dampens my enthusiasm. So, for a while I resigned myself to enjoy the two things this movie really has going for it irrespective of the story: The beautiful pictures from Stockholm harbor and the skärgård beyond it (“skärgården” is the unique Swedish landscape of the coastal archipelago, much recommended for vacation!) and the beautiful actress Harriet Andersson in the title role as Monika. Both are worth enjoying all on their own.

But in retrospect this movie has a lot more going for it. Yes, it is ultimately depressing, but it is also a very fine portrait of young love and the crisis of growing up. “Crisis” is a dramatic term, but that is essentially what it is portrayed as. I think I enjoyed it more afterwards, thinking about the movie, than while I watched it.

We meet two very different characters that happen to be in the very same situation (almost).
Harry (Lars Ekborg) is a sweet boy who has some difficulty finding enthusiasm for his life. His mother died years ago and his father has secluded himself in resignation leaving Harry in a very quiet tomblike middle class home. He got a job as a delivery boy, but his lack of enthusiasm makes him slow and forgetful and the butt of harassment from colleagues and supervisors. Harry is a dreamer and he is clearly looking for a target in his life.

Monika (Harriet Andersson) is impulsive, opportunistic and almost manic in her eagerness to get out of her lot in life. She lives in a small overcrowded working class apartment with a tired mother and a drunkard of a father and about a million siblings. At her soddy work she has to constantly fend off abuse all the while she can see there is a better life out there. Monika is also endowed with a divine body and a sensuality to knock men off their feet and she is fully aware of her assets.

Harry is Monika’s ticket out of the slums and Monika may be the purpose Harry has been looking for so no wonder they click right away and very soon they decide to simply run away together. Their escape from reality is a summer spent on deserted islands with beautiful sunny nights and tons of sex. This is the fantasy of any youth and probably the main cause of the popularity of the movie. There are no boundaries and no rules. Civilization is gone what remain is primitive sensory gratification. A good example is when somebody trashes the boat Harry flies into a bloody fist fight with the offender all without explanation.

Then reality returns. Monika is pregnant (of course, all that humping must have some consequence), they are hungry and especially Monika long for material pleasures. So they return to the city.
Here is where the two characters diverge. Harry found his meaning and has grown up. He is responsible for Monika and the baby and as a consequence strive to take an education and get a job. It is clearly understood that what drives him is this responsibility and his love for his dependents. It is not for his own fun that he sits up at night to study.

Monika however does not grow up. She takes no responsibility, but for her own gratification and see adult life as a prison. To her she is right back where she came from. She is a force of nature and has a primeval drive that cannot be caged in. She spends the rent money on fancy cloths, care shit about the baby and take strangers to her bed. Of course this ends in a split, one taking the adult route, the other refusing to grow up.

Is Monika then the bad girl as the story indicates? That is actually a good question because the movie is a bit schizophrenic on that account. On the face of it the conclusion is conservative in its condemnation of the free spirit against conventional values of responsibility, but that is not the entire story. Despite the split Monika was still the best thing that ever happened to Harry. She was the erotic dream, the catalyst for him become an adult. Whenever he sees the baby he thinks of their summer on the island. Monika herself is a rebellion against all the forces that hold her specifically and women generally down. Why does she have to give up her youth at the age of 18 (well, 19 I suppose after the baby is born), why can she not get all those material pleasures she sees in the windows, why is everybody telling her what to do? In many ways this is a precursor to the youth rebellion era of the late fifties and sixties and the 68 summer of love 15 years early. Monika is a male erotic dream and a feminist activist in the same person and I am left with an ambiguous feeling about her.

This is a civilization vs. nature film and a film about growing up and on both accounts it is a strong film. If it is in any way representative of the Bergman films waiting down the line then I am in for some rough, but ultimately rewarding experiences.
Posted by TSorensen at 22:14