Chimes at Midnight (Campanadas a Medianoche) (1965) 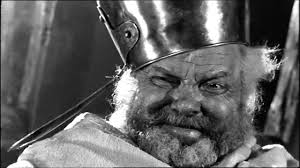 
I am on a roll with odd film experiences. Seriously, the mid-sixties are awash with them. “Falstaff (Chimes at Midnight)” is no exception.

It is a period piece in a medieval setting around some English king and his son and as such should be quite watchable, but as this story is based on a Shakespeare play or two, the actors are all speaking in that particular Shakespearian, declamatory and antiquated manner. Add to that that the sound was absolutely horrible, and the DVD came without subtitles and I have not clue what anybody was saying. It was like watching a silent movie without title cards. I tried to read up on the plot summary as the movie progressed, but it is not the same thing at all and large chunks of the movie is just incomprehensible to me.

This is of course a failure on my side and I have no doubt that there are plenty of people out there who gets a lot more out of this movie than I did. For one I have never been into the whole Shakespeare thing and secondly a native speaker would likely have less trouble than me catching the gist of what the characters were saying.

In any case the story is more or less this: King Henry IV of England (John Gielgud) has supposedly usurped the throne of England from the true heir, triggering an uprising from the followers of that heir. Meanwhile his son, Prince Hal (Keith Baxter) is having a splendid time hanging out in bars with the corpulent and useless knight Falstaff (Orson Welles). There is a big battle between the rebels and the loyalists in which Hal defeats the leader of the uprising in single combat. Later on, at the deathbed of the King Henry IV, Hal and the king makes friend and when the king soon after dies, Hal takes the throne as Henry V. Suddenly Hal is too good for Falstaff who feels betrayed and dies.

That was about as much as I got out of it. Obviously the material of this movie is in the details, in the dialogue and the banter of Welles’ Falstaff, but as mentioned, this was largely wasted on me, so I cannot say if it was fun or deep or hit the right Shakespearian heights. This could be absolutely brilliant, and I would not know.

Orson Welles is very corpulent and seems to be the joke of the movie. He does seem to have an inflated opinion on himself and held in disrepute by everybody else. As such he was likely very entertaining. For me he was just a fat guy rambling around in oversize armor.

Speaking of armor, the battle at the center of the movie is quite spectacular. It is a bloody mess involving a lot of knights in heavy armor and soldiers of all sorts milling around and as it does not require any dialogue I was able to fully appreciate it. Too bad that men killing each other does not hold the same allure to me as it used to.

Besides being partially the reason to me losing out on the dialogue, the sound is an annoyance all on its own. Technically it is very poorly done and some of the voices are so annoying that I felt physical pain listening to it. Just terrible.

I do not feel I am able to judge this movie. There seems to be a consensus appreciation of this movie and I am barred from that club on a mostly technical basis. I will therefore leave it to others to say if this is a good or a bad movie. Let me just say that these were two very long hours of my life.