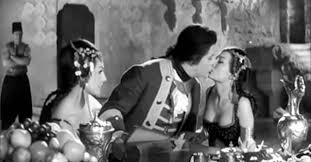 
Okay, that was weird.

I have no idea what the point was with this movie. Given that I spent 3 hours with it and really tried to figure it out, that is pretty bad. Not that this is actually a bad movie per se. The production value is high enough, it has some good laughs and interesting characters, but the bigger picture eludes me.

Some soldiers in one of the Napoleonic wars find a book in a Spanish town that makes them forget the battle around them. First flashback: the story in the book is about a captain in the Spanish army, Alfonso van Worden (Zbigniew Cybulski), who is travelling through a wild mountain range on his way to Madrid. He stops at an inn, which is supposed to be haunted. Soon he is invited into a cave where two pretty Tunesian princesses, Emina (Iga Cembrzyńska) and Zibelda (Joanna Jędryka) claim to be his cousins and want to give themselves to him if he will convert to their faith and drink from a chalice. Whoom, Alfonso wakes up under a gallows. He meets a hermit and his crazy patient who tells his story, second flashback. Soon Alfonso is back in the cave, drinks from the chalice and is out under the gallows again. He is caught by the Spanish inquisition, saved somehow by dead bandits, eventually taken to the castle of a cabalist, who together with a girl has some secret purpose for Alfonso. Here they listen to a story by a gypsy and this is where it gets really complicated.

And then I have not even mentioned the many other stand-alone flashbacks.

Alfonso leaves the castle and has some more interactions with the princesses. He gets a book which apparently tells his story, for him to finish. This he tries to do at the inn of the beginning of the movie, before he throws the book away and seems to go crazy.

There are so many stories here and many of them are actually funny. There are some silly characters and odd, humorous entanglements. They work very well. The women are universally beautiful and would have impressed Russ Meyer and despite the obvious reuse of the same sets in various scenes they are all very well made, especially the costumes. This is a grand movie and quite impressive for what I figured a Polish movie would be like in the mid-sixties.

Yet, this movie is so surreal that it is completely at odds with the production. It has lot more in common with a David Lynch movie than Dr. Zhivago and I suppose that opacity is both the charm and the curse of “The Saragossa Manuscript”. Add the fact that all these Spanish characters speak Polish and we land way out there in the left field.

I am not sure whether or not to recommend this movie. I believe I should, but the confusion I am in tells me not to. I suppose it is not for everybody.
Posted by TSorensen at 22:01