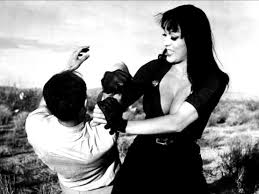 Faster, Pussycat! Kill! Kill!
I do not think I ever watched a Russ Meyer movie in its entirety before. Usually I fall asleep or simply get too bored to finish, so this was a first. Ironic when you think about it, Russ Meyer’s movies being all about speed, sex and violence (as the title aptly indicates), but somehow it never really works for me.


The reason “Faster, Pussycat! Kill! Kill!” is on the list is as a representative of the Russ Meyer catalogue, but also of the exploitation genre that lived a grassroot life in the sixties and seventies and influenced Tarantino and his ilk in the nineties and onwards. It is not a great movie by any standard, but it does catch the exploitation vibe neatly enough.


Varla (Tura Satana), Rosie (Haji) and Billie (Lori Williams) are three go-go dancers driving sports cars in the desert. It is never clear exactly why, but for the hell of it. Out there they have an encounter with Tommy and Linda (Ray Barlow and Susan Bernard), whom they first race and then proceed to kill Tommy and abduct Linda. I believe Tommy accused Varla of cheating.


Later they learn that a small fortune is hidden on a lonely ranch and they decide to go there. This is where things get a little more complicated. The old man in his wheelchair on the farm is an angry pig and he likes a pair of tits when he sees some. Of his two sons one is decent enough and the other is a lot of muscle and little else. This end up in a sort of everybody against everybody else, with Varla killing off most of them.


The signature feature of a Russ Meyer movie is the emphasis on big breasted and strong women. At first (and probably second) glance this hints at a sexual affinity for dominating women and at that point we are very far into the lurid zone. A movie for male gratification. It is probably not entirely wrong that Russ Meyer got off on top-heavy, dominating women, but I believe there is more to it than that. Considering this is the opening of the sexual revolution of the sixties, this is also a movie of women experiencing freedom. Freedom to do whatever they want, to be as sexual as they want and freedom to take what they want. Yes, it is an exploitation movie and yes, we get sex and violence, but it is also very liberating.


Speaking of sex, I think somebody going in to this movie expecting it to be soft-porn will end up disappointed. Except for some very deep cleavages we actually see very little skin. There are no free-flying breasts or dicks here and sex is only hinted at with some petting and kissing. It is actually surprisingly demure. The violence is more explicit but again with surprisingly little gore. What the movie does is that is talks and hints at sex and violence and is undoubtably about both, but it actually shows very little. Curious.


The acting here is not amazing. The girls are mostly posing, and the dialogue is both over the top and artificial. It makes me wonder where Meyer found these girls and who came up with the script (probably Meyer himself). The filming is better with some interesting angles and some nice shots, especially when the girls are racing.


Story wise it does not make a lot of sense either. There are so many plot holes I do not know where to begin. Lets just start by going around in the desert in a bikini. Those girls have some serious sunburns coming their way.


When I got to the extra material (easily the best part of the DVD) I learned that the actual format of the movie was 4:3 and not the widescreen I had been watching it in. That had made the girls even bigger than they really were and frankly not just a bit comical.


This is a hard movie to recommend. I do actually find exploitation movies entertaining and I love Shaft and that sort of Blaxploitation movies, but the Russ Meyer variant of exploitation just never really does it for me. Still I suppose it is one of those movies you have to have seen. Just to say you have done it.