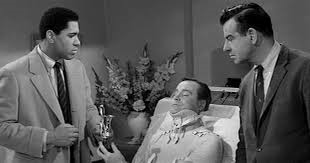 Off-List: The Fortune Cookie
When I was looking for extra movies to add to the List for 1966 I stumbled over “The Fortune Cookie”. I had never heard of this movie, but it was a comedy, something the List is short on. It also features Jack Lemmon and Walter Matthau, a classic duo that usually ensures a watchable movie. But most importantly it was directed, written and produced by the great Billy Wilder. Seriously, any movie by Billy Wilder is worth looking up.


How could this not be a great pick?


To my great disappointment this is not a remarkable movie. There are good reasons this is not on the List and why I never heard of this movie. It is not terrible or anything, it is just not very good, and most importantly for a comedy, it is not that funny.


Harry Hinkle (Jack Lemmon) is a cameraman for CBS at an American Football game when a football player, Luther “Boom-Boom” Jackson accidentally runs him over. Harry is not really injured, but his brother-in-law, William “Whiplash Willie” Gingrich (Walter Matthau) insists that he needs to pretend to be badly injured so they can get a monster indemnity.


That is really what the movie is about. William is running the scam that Harry is a wreck. The insurance company sends out a detective to prove it is a scam and Harry’s ex-wife shows up to get a slice of the cake. In the middle Harry Hinkle is unhappy about the whole thing and makes friends with Boom-Boom who takes care of him.


Running this scam is supposed to be funny. Crooks biting off a large piece of cake than they can swallow and petty insurance people trying to uncover the scam. It is just is not that funny. Instead the joke very quickly becomes tired and it is as if Billy Wilder did not really know where he wanted to go with this. This is most clearly demonstrated by the fizzle of a climax, that was truly disappointing.


I had high expectations for the “Fortune Cookie”, but already after 10-15 minutes I started looking at the clock and that is never a good sign. It was as if the heart was not in it, the way it is in most of Billy Wilder’s movies. Lemmon and Matthau are okay, but they do not have that much to work with and it becomes very cliché.


On the photography side I could not help feeling that I had just stepped ten years back in time, that this was not 1966 but 1956. Watching this back to back with “Blow-up” just emphasizes that feeling.


These three slots I have granted myself each year are supposed to be reserved for movies that deserve to be on the List, but sometimes you just have to take the chance and see where it lands and this one unfortunately does not deserve to land on the List.