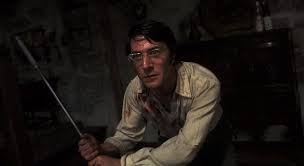 I was warned against “Straw Dogs”. The description in the Book made it sound so uncomfortable that I wondered if I really wanted to watch it and Peckinpah’s previous film on the List “The Wild Bunch” did not sit well with me. I also believe I received warnings from elsewhere that this movie was too much. In that light I am almost disappointed to watch it and find out that it was not as bad as that. Not at all, actually. It may be my jaded 21st century position or it may simply be me expecting worse, but “Straw Dogs” did not exceed my boundaries. I even found it quite compelling.

David Sumner (Dustin Hoffman), a quiet mathematician and his pretty and lively wife Amy (Susan George) have just moved into her old family home in a remote and very rural part of the British countryside. The idea is that he gets the quiet he needs for his mathematical research while she… Well, it is not exactly clear what she is supposed to do, except for being back in her old haunt and it quickly becomes apparent that this is a problem. Amy is bored. Clearly her idea was that their life in seclusion would be that of a love nest with permanent attention thrown her way. David does love her, but there is work time and there is attention time and somehow Amy failed to get that brief.

It is not because attention is unavailable. Half the village hillbillies are drawling over her and as they consider David only half a man, not able to stand up for her, they are moving in. Fooling David into a duck hunt where they park him in the wilderness, they go to rape Amy. This is a weird scene. Right away Amy picks up what they are aiming for. Charlie (Del Henney) is her former boyfriend and, clearly, he thinks he can still get some. Amy resist, but as he is insisting, I get some very mixed and confusing signals from Amy. Does she actually want this? Only when the next in line gets to her do I clearly sense her horror.

Afterwards, Amy never tells David about this and I am uncertain what to make of this. I had sort of expected that David would raise to this provocation and hold the culprits accountable. Instead it will be in defense of the retarded but big Henry Niles (David Warner). At a Christmas event Janice Hedden (Sally Thomsett) hits on Henry, gets him to follow her out and wants to make out with him. She is the daughter of head-hillbilly Tom Hedden (Peter Vaughan) and learning Henry is with Janice the hillbilly gang sets out to beat him up, armed with a lot of alcohol. David and Amy accidentally hit Henry with their car and take him home, which leads the hillbilly gang there as well. Soon the Sumner house is under siege.

These last 40 minutes are truly intense. David defends his home like a castle, Amy is pissed at David, Henry is panicking and the hillbilly gang is like a horde of mindless zombies. In fact, this part is very similar to “Night of the Living Dead”, so close in fact that I wonder if the stories have the same source. Even a more recent, but far cozier, movie like “Home Alone” picks up on this theme of a home under siege.

Certainly this part is violent and it is terrifying to see the quiet and friendly mathematician having to kill people, but this is a kill or be killed situation and it is not so that David suddenly turns into a trained killing machine, nor does he have some brilliant defense plans. He simply rises to the occasion and hates every bit of it. Amy seems to be crumpling but also manages to pull through, stepping over the line where she also inflicts damage on other people.

This is bad ass and in your face violence, bestial violence, that David is facing and Peckinpah shows us every bit of it, but there is nothing here I have not seen Tarantino do ten times so I am fairly inured. What Peckinpah manages to here is to remove the cartoon effect and make it real and to keep the steam up in a sequence that could easily become tiresome in less capable hands. The Book says there is no catharsis effect, but I am not so certain of that. Their life in the house is forever ruined, but they did fight this off together and it may be the one thing that could save their marriage.

I am not a fan of Peckinpah, but there was a lot more to this story and much more relevance too than what I saw from him in “The Wild Bunch”. It actually ends up with a recommendation from me.

Reading the review on "Straw Dogs" on Steve Honeywell's 1001Plus site got me to philosophize on the name of the movie. Maybe it is just me not being entirely familiar with the term, but I read Straw as referring to the rural setting, the hillbillies, and Dogs as bestiality. Hillbillies turned beasts. David is the opposite, decency and civilization, and his construct is under siege by the straw dogs. The same for Amy, except she thinks she want the beast until she realizes her terrible mistake.