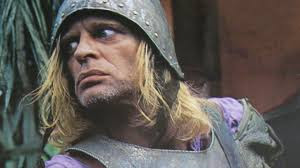 It is a new year on the List and the movies are now only 48 years old, yay! The first 1972 movie is “Aguirre: the Wrath of God” and I would have loved to say that 1972 is starting strong, but I am not entirely convinced.

“Aguirre” is a movie by Werner Herzog, a prolific director who is still making movies today, but strangely enough I have watched very few of his works. Well, that is what the List is for, to let us see movies we would otherwise have missed.

It is 1560 and Pizarro’s band of conquistadors have successfully taken down the Inca empire and robbed it clean. Now their eyes are set on the next price: El Dorado, where the streets are covered with gold and if there is something a conquistador cannot resist then it is gold.

Pizarro (Alejandro Repullés) sets out into the jungle with a small army but is soon bogged down. Instead of continuing he sends out a smaller force to scout ahead and bring back information on the land ahead and any sign of El Dorado. This expedition is led by Ursúa (Ruy Guerra) and they immediately build rafts and set out on the river.

It is a motley band, drifting into oblivion. Indian slaves, including a former prince, a black slave used to scare the Indian, two women who does nothing but wear their fine and always clean dresses, and a bunch of soldiers including Aguirre (Klaus Kinski), a mercurial officer. What happens through the remainder of the movie is that the members of the expedition are taken out, one by one, by the Indians, through internal strife or the hardship of the travel. Aguirre, obsessed with the price of taking El Dorado, gets crazier and crazier and coup the expedition and they find… absolutely nothing.

The theme here is white man’s greed. The conquistadors are simple thieves, highwaymen possessed by greed. Their senseless pursuit for the elusive price leads to nothing but destruction and oblivion, but with substantial collateral damage. There is a complete insensitivity to the land they are travelling through and the people living there. They are blind to the natural wealth while their eyes are fixed on a price which is just an illusion.

It is interesting to watch this movie in 2020 and notice how nothing has really changed. The themes are still valid and the people on the rafts could as well be us as the world of 72 or the conquistadors in the sixteenth century.

I think those are the eyes to watch this movie with: as an allegory. On its own it is a frustrating movie to watch. Practically everybody of any importance to the story are insufferable and there is nothing but destruction, defeat and madness in the course of the movie. You learn early on to despise the characters and there is some satisfaction in watching them succumb to their greed and ultimately impotence, but it is odd to watch a movie where you cannot wait to see the characters meet their respective ends.

Still it is also a beautiful movie. Made on a shoestring budget there are amazing pictures of the rainforest a plenty and even the demise of the expedition is filmed in glorious color. There is some symbolism in the dirty, ugly look of the soldiers, the tidiness of the Indians and the spotless cleanliness of the women, which is captured very well by the camera.

It is not a movie I enjoyed as much as I found it interesting. It is not an adventure and it is not exciting, but as an allegory it is spot on.