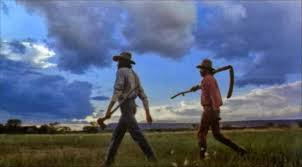 The second new addition to the List in the grand 10th edition revision to 1971 was “The Hired Hand”. This was Peter Fonda’s first project after “Easy Rider” and the first movie he directed and honestly this could hardly be a more different one.

Harry Collings (Peter Fonda) and Arch Harris (Warren Oates) have been riding together for seven years. There is no telling what they have been up to, but that it has been a nomadic life. Harry has gotten sick of this life and long to go home. At the same time their younger partner, Dan Griffen (Robert Pratt) gets shot in some God-forsaken hamlet over a horse, marking the punctuation to the roaming life. Harry and Arch return to Harry’s wife Hannah (Verna Bloom) and her homestead. She does not want to recognize him as her husband right away, figuring he will probably leave again and her daughter believes her father is dead. Instead Harry and Arch are staying in the barn as hired hands. Slowly, however, Harry and Hannah are warming up to each other and Arch, rather than being a fifth wheel, rides out. When Harry learns Arch is held captive by the people who killed Dan he has to choose between saving his friend or staying with his wife.

The first thing you notice watching “The Hired Hand” is the pace. This is super slow. So slow in fact that the film occasionally goes slow-motion or even stops and becomes stills. Nobody ever runs, all riding is in a trot and conversation is slow and economic in words. The story itself is of necessity equally short and simple.

This super slow pacing allows the movie to dwell on particular elements in ways other movies cannot. The funeral of Dan, the eternal ride across the land, the emotions on the face of Hannah which speaks more eloquently than any dialogue. It also allows the movie to go very visual. Every frame seems to be there for its visual impact and goes for an almost over the top aesthetic. Combine that with a moody score and there are parts of the movie where the entire purpose of it seems to merely be to build a number of tableaux. Montages with double exposure, silhouettes and slow motion. It is all very pretty, but more than once I got reminded of cheap seventies romances who went for exactly the same aesthetic and when you see it in “The Room” you know this theme has run its course.

But “The Hired Hand” is before all this and should not be judged by later abuse.

Warren Oates is fast becoming one of my favorite actors and his presence her is huge. Fonda himself reminds me of Viggo Mortensen with his gruff looks and soft voice, but the center of the movie belongs to Verna Bloom as Hanna Collings. She is the strong woman who stayed and ran the farm when her husband flaked away. She is the one he has to appease and convince to be accepted again and she could and would take in men to her bed in his absence when she felt the need. Her place is a garden of Eden whereas the world the men roam is a devastated and depraved wasteland. It is, I believe, a very strong feminist statement.

I think I liked “The Hired Hand” or I liked the idea of it. The pacing and the aesthetics verge on the ridiculous, so close to tipping over that it almost becomes a spoof of itself, but I believe it does pull through in the end, not least thanks to the down-beat ending. The beauty and the hardness go hand in hand and maintain a balance, tenuously, but it is there.

Universal had no idea what to do with “The Hired Hand”. Could this be marketed as a Western? Was this a follow up on “Easy Rider” Who should see this movie? The release and marketing of “The Hired Hand” was therefore a disaster and the adapted tv release was no better. Only in 2003 when the original was restored did “The Hired Hand” get a proper reception, but likely too late to really make an impact.