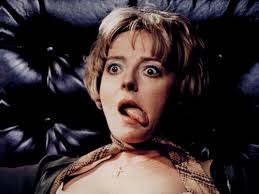 To me, “Frenzy” is a bit of an after-thought. An old man’s pastime, trying to relive his old successes. It is not a bad movie per se, but merely an unnecessary movie. I feel like we have seen it all before from Hitchcock, and usually better, and, well, it is not outright sloppy, but it lacks some soul and depth as if it was done on the cheap as sort of a left hand job.

Hitchcock is back in London where it all began and has made a murder mystery with all the usually Hitchcock ingredients. A Jack the Ripper style murderer is killing off women through strangulation and a man called Richard Blaney (Jon Finch) is inadvertently placing himself in a position where he is the prime suspect. Partly by being in the wrong place at the wrong time and partly by being bitter and aggressive to everybody and their mother. Being considered unpleasant is never a good starting point.

When Blaney’s ex-wife Brenda (Barbara Leigh-Hunt) is killed, Blaney was spotted on the scene and when his current girlfriend Babs (Anna Massey) is found dead, Blaney had just spent the night with her. Of course, nobody believes Blaney to be innocent, least of all the police who can close the case very neatly.

We learn very early that it is Blaney’s friend Bob Rusk (Barry Foster) who is the murderer. This is not really a spoiler. The element of tension here is that only we know this, while Rusk successfully divert everybody’s attention elsewhere.

So, we have some “The Wrong Man” here, some “Psycho” and a few other Hitch classics thrown together. All in a wrapping that harks back to the very early British productions. It is more graphic than usual for Hitchcock but also a lot less subtle. It is as if he on his old days have decided to speak in capitals and the result is that we as an audience can pretty much guess the next few steps. The murders are gruesome and the predicament of Blaney is tight and people around the scenes are very prejudiced. That may be very helpful to the audience and including a few laughs is usually a good spice, but the end result is that “Frenzy” becomes a bit of a caricature, almost a parody on a murder mystery. The characters become very one-dimensional and flat, types more than people. Rusk is a psychopathic sadist, but mostly because other people describe him as such. There is no backstory. Blaney losses both ex-wife and lover, but instead of a grief-stricken man, he is mostly concerned with avoiding the police. When he turns on Rusk it is because of his treason, not for killing his loved ones.

Even the ending is a bit… off. The police inspector Oxford (Alec McCowen) starts musing over Blaney’s accusation that Rusk is the killer and with just few questions to the right people the whole story unravels. Seriously, a man asking dating agencies for women who likes pain, which then turn up dead, such a guy would deserve some investigation one should think.

Add to this a score that sounds like something from a western or “Dynasty” and the picture is complete.

I cannot help thinking that Hitch should have stopped after “The Birds”. This slow deroute is a tarnish to his catalogue and I prefer to remember him for his peak period in the fifties.

The audience liked “Frenzy” though, it was a box office hit. Maybe it is just me expecting too much from Hitchcock.