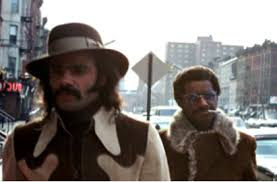 The last 1972 movie is “Superfly” and that is a worthy capstone to this year.

“Superfly” is a blaxploitation movie in the vein of “Shaft” and “Sweet Sweetback…”, but better. Many of the ingredients are the same: A black dude on the edge of the law who is incredibly cool and smart and knows how to stick it back to the white man. It also has super hot music and a grimy look at an urban jungle that is raw and poor, but teeming with life. What “Superfly” has compared to its predecessors is production value. It was made on a shoestring budget, but you cannot see that. This is solid stuff.

The cool and smart hero here is Youngblood Priest (Ron O’Neal). He has made good money on dealing drugs and likes to spend it on bling. Fancy hair, fancy cloth and the most pimped up car I have seen in a long time. Priest however wants to go clean and make a break from the drug business. It is understood that drug dealing is the only opening for a black man so the way to break out is to make a score so big that you do not have to pursue a career. The plan is to by 30 K of coke from Scatter (Julius W. Harris) with the combined funds of Priest and partner Eddie (Carl Lee), sell it and leave.

Scatter’s supplier however is a gang of corrupt, white policemen who does not what to see their distribution network split. Scatter tries to quit and fail. Eddie is happy working for The Man. What is Priest to do?

This is not the most elaborate plot ever. Reputedly, the script for the movie was only 45 pages, but it is enough. This is all about diving into the world of the black ghetto and this portrait gets a lot of attention. Not to the extend of taking over the movie, though. Priest navigates through this world, meeting his clients, his mistresses (I had some trouble keeping track of them), visiting bars, gambling halls and in one of the highlights of the movie, Scatter’s restaurant where Curtis Mayfield is playing (“Pusherman”). In typical blaxploitation style it combines the poverty and deprivation with the energy and cultural strength of the community. Sure, these people are drug dealers, but this is not a movie about drugs, but about the black struggle to break free of chains imposed by The Man (the white dominated society). The function of the drugs is as an allegory on the black community cooperating with the white to keep it imprisoned.

To me this was all about the music and the style. By a curious coincidence I had just been revisiting “Superbad” and “Superfly” felt like a straight continuation. So much so that Apatow must have been inspired by “Superfly” (I suppose the title is a give-away…). Seriously, I was totally chilling with the music.

I have no way of knowing if this movie provides in any way a truthful portrait of the black community, but it felt a lot more honest and straight than “Shaft” and “Sweet Sweetback” and thin as the story was, it did interest me enough to draw me in. Apparently, I was not alone. “Superfly” was a box office hit, so much so that on the night of the premiere, people broke into the cinema to watch the movie. It seems to have tapped into a need and it lifted movies about the black community into the mainstream.

This is the blaxploitation movie I would recommend, and it is the perfect goodbye to 1972.