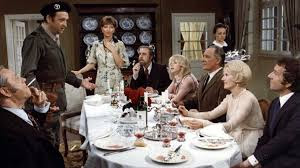 It is time for another movie by Luis Bunuel and this time I am quite charmed…literally.

“The Discreet Charm of the Bourgeoise” (“Le Charme discret de la bourgeoisie”) is a strange movie, full of Bunuel’s surreal ideas. It is also a comedy where the surreal become farcical, resulting in one of the most enjoyable Bunuel movies so far on the List.

Relating the plot is virtually impossible. Six characters, Rafael Acosta, ambassador to the invented country of Miranda (Fernando Rey), Mr. and Mrs. Thevenot (Paul Frankeur and Delphine Seyrig), Thevenot’s sister Florence (Bulle Ogier) and Mr. and Mrs. Sénéchal (Jean-Pierre Cassel and Stéphane Audran) try to meet to have dinner, but are every time interrupted, usually by something surreal. People show up on the wrong evening, the hosts have sneaked out to have some alone time in the garden, the owner of the restaurant has died and a wake is in progress and so one. The interruptions get weirder and weirder and play out with that straight face that make them hilariously funny.

There are a lot of dreams in the movie, which seem to have multiple purposes. The most obvious being as a reset button. Whenever the story has moved far enough out of a surreal tangent, somebody wakes up and we learn that it was just a dream. That helps a lot to ground the movie because the most surreal elements are then explained, but we never know when the story turned into a dream, which is yet another surreal element. Of course, as in all of Bunuel’s movies there are deeper meanings where I am certain the dreams play a role, though those are not entirely clear to me. Something Freudian about repressed thoughts seems to fit. These members of the bourgeoisie appear to live a carefree life where their only concern is their own company and to get something good to eat and drink. The dreams are then their guilt, all the things they should have been concerned with. There is even a dream within a dream and, as a bizarre element, random people who come up to the characters to tell them about a dream as, of course, these things happen all the time to people.

The characters are not really evil or bad, they just want to meet and eat some food. Sure, the men are smuggling drugs and the ambassador is having an affair and under constant attack for things happening in his country, but that is all very trivial. What matters is how to serve a dry martini or to cut up a lamb roast.

Bunuel was always political so of course “The Discreet Charm of the Bourgeoise” is political. He draws a parallel between the modern bourgeoisie and the eighteenth-century court at Versailles, where the nobles lived their insular lives of pleasantries, immune to whatever ailed the world. Here Bunuel lets that world constantly distract the bourgeoisie, but not in any dramatic way, mostly, but enough to break up the activity they really wanted to be engaged in. And, because this is Bunuel, there is even a priest.

I cannot say that much of the movie made a lot of sense and normally that would bother me, but not this time. Instead I was constantly chucking at all the absurdities Bunuel is coming up with. Not unlike my experience with L’Age D’Or. This is fun crazy stuff. Not outright slapstick, but the tangents just constantly slide into the bizarre with such ease.

Although there are obviously deeper motives, the great thing is that it is not necessary at all to read politics and Freudian themes into the movie because it is so amusing even at face value. It is crazy and insane and absolutely enjoyable.

Highly recommended for those (like me) with a penchant for absurd comedy.