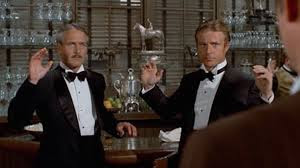 A new year for me and this one is special. 1973 was the year I was born so from now on I could technically have watched the movies upon release, though frankly I do not remember watching any movies until around 1980 and those movies hardly made the List. Anyway, from now on the movies are no older than I am.

The first movie of 1973 is the “The Sting”. That is a pretty solid start for the year. “The Sting” won no less than 7 Academy awards, including Best Picture, though none of the acting awards (Redford was nominated as best actor), so this is clearly THE movie of the year. This is also a movie I remember having watched ages ago, but I have reached that blissful age where details quickly fade away and as it turned out I remembered absolutely nothing of it with the possible exception of the score. That includes all the plot twist and so I was drawn around in all the scams of this caper movie, falling for every one of them.

I cannot say if “The Sting” was originally intended as a vehicle for Paul Newman and Robert Redford, but it is clear that setting them up together again after “Butch Cassidy and the Sundance Kid” was a guaranteed success with the audience and in the various presentations I found it is this partnership that is emphasized. Admittedly there is very good chemistry between these two buddies, but to my mind it takes backseat to the two great draws of “The Sting”: The wonderful screenplay and the ambience of the movie.

Johnny Hooker (Redford) runs small scams in a minor town when they suddenly pay off. Together with his partner, Luther Coleman (Robert Earl Jones), they catch a windfall of 11.000$. The mob, whom they have robbed, lets no such act go unpunished and soon Luther is dead and Hooker is on the run from both the mob and the local police lieutenant Snyder (Charles Durning).

Hooker seeks out Henry Gondorff (Newman) in Chicago upon Luther’s recommendation. Gondorff is a legendary conman who has grown bored, so when Hoooker shows up with an urge to revenge himself on mob leader Doyle Lonnegan (Robert Shaw), Gondorff quickly change gear and soon a most spectacular con is in progress. Will they manage to outsmart Lonnegan and the police and who can you actually trust?

Caper movies can go two ways: Either the law wins and we merely watch an elaborate and cunning plan go to pieces, usually in the last act, or the conmen gets away with it and we see all the pieces fall into place. To the credit of this movie, I was very much in doubt which way it would go until the last scene and I will not spoil that here. Suffice to say that the screenplay takes us on an amazing ride full of twists, backstabs and incredibly complex plans and as a viewer I was kept on the edge of my seat all the way and greatly entertained.

Most amazingly, “The Sting” manages to recreate that 1930’ies feel, not of reality, but of movies of the age. It is more 1930’ies than any movie actually from the thirties. The ragtime music, the costumes, the stages and the lightning. It all combines to give this ambience of a 30’ies fairy tale. The con itself is also so incredible it could only really work in a movie of that age, with that certain amount of levity that made my think in the direction of “The Thin Man”, but with the brawn of a Cagney movie. It is no wonder that “The Sting” won so many technical awards.

I had a great time watching “The Sting” and it is great to take a break from seventies social realism. That will return soon enough. This is just wonderful escapism and a perfect lockdown movie.