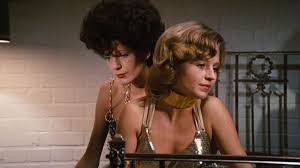 In high school we once went to the Royal Theater in Copenhagen. That is a big thing when you live in a small town in Jylland. I do not recall the name of the show, but it was something by Rainer Werner Fassbinder and the only thing I remember here thirty years later is that I was bored senseless.

Maybe that is the reason I have stubbornly avoided Fassbinder through all those years. No more so, Fassbinder is behind this next entry on the list and there is no way around it.

I have no idea if “The Bitter Tears of Petra von Kant” (“Die bitteren Tränen der Petra von Kant”) is representative of Fassbinder, but it was pretty much what I expected a Fassbinder movie would be like. Very static, very talkative, very much filmed theater, and quite intellectual.

If the reader now think that I did not like the movie and was bored yet again, then I am sorry to disappoint. Maybe all those very symbolic and stylized movies this era is so full of has inured me, but I found “The Bitter Tears of Petra von Kant” far easier to deal with than most of the movies over the past few years. It is fairly straight forward and not without humor.

Petra von Kant (Margit Carstensen) is a fashion designer and probably a reasonably celebrated one. We find her in her bedroom/atelier/living room, well, the only room we ever see in this movie. There is a second character in the room, Marlene (Irm Hermann). She does Petra’s every bidding and never say a word. She functions as a maid, but it is more than that. Petra gets a kick out of domineering Marlene and Marlene seems to enjoy the degradation of being treated no better than furniture.

Petra gets a visitor, her friend Sidonie (Katrin Schaake), which gives Petra the opportunity to talk a lot about herself. It is quite clear that Petra is very impressed with herself and takes a position superior to everybody else. She does what she wants and if people cannot follow her, she discards them. Sidonie introduces Petra to Karin Thimm (Hanna Schygulla), a girl half Petra’s age and just returned after five years in Australia. Petra smells young meat and sets out to seduce the girl. Right in front of Marlene.

So far, this has been fairly dull, mainly a demonstration of how dominant and arrogant Petra von Kant is. Six months pass and we now find Karin in Petra’s bed but deeply uninterested in Petra, and this is where the story is turned upside down. Petra has lost her power over Karin and in return Karin knows exactly how to cut Petra to pieces and coldly wields that power. Watching Petra taking the verbal beating was actually funny, which is not really nice of me, but the free fall of Petra into humiliation was not… undeserved. Karin simply walks out on Petra and there is nothing Petra can do except lash out on Marlene. That Marlene should see her degradation is the ultimate humiliation.

Losing the position of power is everything to Petra so when she gets visitors for her birthday, she is a sorry sight, lashing out against everybody, including her own daughter and mother. Only when Karin calls her does she get some of her position back and now she does not need her family anymore, they can please go away. Maybe Petra has now become a masochist and gotten her fix from her young master.

The final scene when Marlene leaves is a bit mysterious. On Wikipedia the analysis is that Marlene will not get her masochism satisfied anymore. My interpretation is that Marlene exacts the perfect revenge: by simply leaving.

It is so cliché German with a story about power games, but I have to say it works, in a slightly sickening way. Defining yourself in terms of power and position is primal but also so primitive, as if it is something you really should grow out of as an adult. Yet, there are people who needs this to give value and meaning to their lives. I am certain there is a lot of material for a psychologist right there.

“The Bitter Tears of Petra von Kant” was better than I thought but it is an extremely static and talkative movie and me as a high school student would still have been bored senseless.