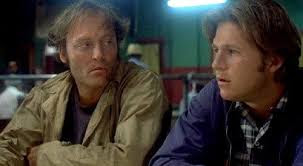 It seems to me I am getting more and more negative in these reviews. I really do not mean to be, I go into them with an open mind and hope to be wowed, but too often I sit back afterwards, struggling to find something nice to say. This was no exception, but I will try to make this a bit more positive.

“Fat City” is essentially about stupid people throwing their lives away, a bit like “Wanda”. It is also about boxing and I happen to be one of those few people who think boxing is a barbaric sport. Watching two men beat the crap out of each other for sport is just… awful.

So, we start at a low here.

Billy Tully (Stacy Keach) is a former boxer who dreams of coming back to the sport and make it big. Unfortunately, he is also a weak person with limited self-control and discipline, not terribly bright and busy blaming everybody else for his life of failure. He is pretty much white trash. In the course of the movie, he tries to get back into boxing, then give it up and goes back to random field jobs. He hooks up with an alcoholic woman, Oma (Susan Tyrell), whose life is even more messed up than Billy’s. Predictably, that does not last long. Billy gets back to boxing again, this time with more luck, and he actually gets to box a game (against an opponent with a stomach disease) but then he gets upset with his coach and drops out again.

Meanwhile we meet Ernie Munger (Jeff Bridges), a very young man with a talent for boxing. Sparring with Billy, he is encouraged to join a club and fight a few games, but then his girlfriend gets pregnant and she coerces him into marrying her so he quits boxing and now he is out doing random jobs in the fields.

However, this is a movie by John Huston, THE John Huston. That means that despite this is a movie on Cheapside, there is nothing random or poorly crafted about the movie. It is exactly as intended, on the set, the acting and the characters. This is high quality meant to look cheap and that makes it rather different from uneven movies such as “Wanda”. Huston is also able to get amazing performances out of his cast. They may look like scum, but that is just first class acting. Susan Tyrell as Oma is particularly amazing. I could have sworn Huston had simply found her in a bar somewhere, but Tyrell had quite an acting career and was nominated for an Oscar for Oma.

It is a bleak story, but it is also a relevant story. Poverty and out-of-luck themes of course always have their particular relevance, but the central theme here is the illusion of the chance to make it big. These are people who cannot really deal with the idea of making it to Fat City. They want to so bad, seeing that it will somehow save them, but they crumple under the pressure and it is simply not realistic that they will get there, but without it they have nothing. Billy and Oma and to some extend also Ernie expect that it will happen, that it will come to them, that, somehow, they are entitled, but they give up and see it slip out of their hands. When Billy and Oma are done beating up themselves it is time to blame the rest of the world.

There is a very nice scene at the end of the film where Billy and Ernie are sitting at the counter watching the old man pouring them coffee. Billy scuffs at the thought of ending up like that man, but then he smiles, and it turns out he is happy, and it is as if Billy and Ernie realize that that is the objective, that this old man has made it.

See, that was not so negative. Still, this is not the movie I would recommend to someone about to go lockdown-nuts. At least, check first there are no tall places to jump out from or sharp knives in the room.