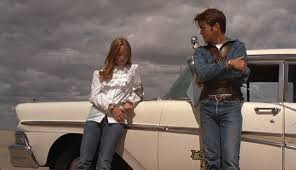 I have never been a fan of the touring criminals genre. Intellectually I understand that this is the ultimate freedom dream, to go anywhere you want and do anything you want, no limits, but I do not feel that fascination and without that there is just not that much left. Killing and stealing left and right just does not feel that cool.

I also do not care that much for movies about white trash. That is probably a very arrogant and ignorant position and I sincerely apologize, but I do not even want to relate.

White trash on a killing tour then… well, with that premise we start at a very low point indeed.

Yet, “Badland” is touted as a great and classic movie so either there are a lot of people who think differently from me or there is something else to this movie.

Kit (Martin Sheen) is a young man in some South Dakotan town who pics up (and quickly lose) random jobs. While being a garbage collector he meets the 15 year old Holly (Sissy Spacek) and wants to get to know her. Neither of them say or do much that is worth listening to and them hanging out together seems more like a thing to do because they are bored and cannot think of a reason not to. Holly’s father does not approve so Kit breaks into the house, packs a suitcase for Holly and shoots her father, right in front of Holly. You would think Holly would be screaming and shouting but she seems mostly indifferent and so they set the house on fire and leave.

They build themselves some fantasy treehouse, but eventually have to move one. Wherever they go Kit uses his guns to remove obstacles and Holly never seems to question the sense of it. Eventually, Holly does not care to continue and Kit gets caught and that is about it.

These two youngsters appear as complete morons, but I think it is more correct to say that they live in an alternate reality where what they do is completely okay. Kit likes to think of himself as a James Dean character and that he has great things waiting for him. Holly seems to live in some childishly innocent dream world and both of them are completely numb to the suffering they are causing.

My guess is that the “greatness” of this movie is somehow in the portrait of these two, although I have some trouble figuring out what that is.

One thing that really works though is the photography. Every single picture is knife-sharp and saturated in color. The images are staged like Sergio Leone’s and the great emptiness of the High Plain is perfectly captured. Probably an analogy to the feral emptiness of Kit and Holly.

There is a stark beauty which is in contrast to the insensitive characters that makes the film itself feel like a poem. As if in their heads they are aspiring to a beautiful dreamlike world and in the disconnect from the real world they have grown insensitive to it.

I am not certain this at all makes sense.

As much as it tries though, to me this is still a movie about white trash on a killing tour. In a nice wrapping, yes, but I cannot get much beyond that.

Still, there are plenty of fans of the genre and I will leave this movie to them.